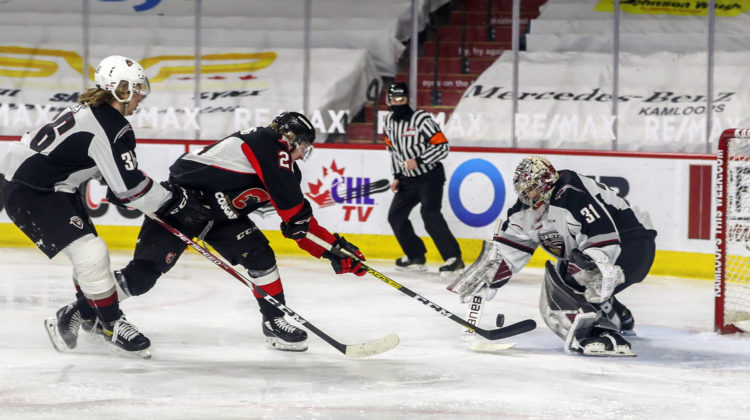 The bigger they are, the harder they fall.

Led by a four-point effort from Jonny Hooker, the Prince George Cougars made a statement against the Vancouver Giants on Saturday, dispatching them 6-3 from the Sandman Centre in Kamloops.

“I think we are growing as a group. You get a few games under your belt and you get a couple of good practices in when you are not playing, you can do a lot of things. The biggest thing is how we played and the buy-in of what we had to do against a really good hockey club,” said Mark Lamb, Cougars Head Coach and General Manager.

“I really like how we competed tonight, even away from the puck more than we have in the past.”

Both BC Division rivals provided some early offensive fireworks in the opening 20 minutes, scoring twice each.

Ethan Browne and Koehn Ziemmer lit the lamp for the Cougars, while Mazden Leslie and Alex Kannok Lieper found the back of the net for the Giants.

While most coaches aren’t a fan of the back and forth fireworks, Lamb was actually quite pleased with his team’s start.

“I think we should have been up 3-2. We had a chance right at the end of the period on a wide open and I couldn’t believe it didn’t go in so I really like how that ended.”

However, the Cougars found another gear in the second period, courtesy of a Craig Armstrong short-handed marker at the 4:40 mark.

Craig Armstrong says “I don’t need any help” and does it himself to score a shorthanded beauty for the @PGCougars 💪#REMAXHub pic.twitter.com/bDLL5K3FkV

The tide continued to swing in PG’s direction after Vancouver forward Bryce Bader was slapped with a five-minute interference major after knocking Hooker to the ice.

Hooker would have the last laugh, letting go of a quick shot that fooled the Giants, giving the Cougars a 4-2 advantage at intermission.

“I think a lot is going well for us. I think we are working hard and creating lots of offense and my line is making great passes, I have to give it to them. It’s working really well right now,” added Hooker.

In his first career WHL game, Winnipeg product Hudson Thornton ripped a shot for a 5-2 edge courtesy of a Fischer O’Brien feed.

The 17-year-old was happy to pitch in on what was arguably the Cougars best performance of the season.

“It feels awesome. The boys played so well and to contribute to win like that is pretty special.”

Not a bad start for rookie Hudson Thornton of the @PGCougars in the #REMAXHub! pic.twitter.com/oi6HvUNf0y

Thornton played last season in the BCHL with the Chilliwack Chiefs posting 17 points in 54 games.

He started 2020-21 with the Fargo Force of the United States Hockey League appearing in 23 contests before signing with the Cougars in the New Year.

“Coach Lamb and Jason Smith were telling me it’s going to be an exciting future and to be able to be apart this is going to be pretty special, even a couple years down the road. But, even right now, this is pretty exciting,” added Thornton.

Lamb was quick to praise the rookie, stating his presence both on and off the ice has been quite noticeable.

“Right when he got here he added life to the group. In practice, he’s a guy who is into it, he’s into playing hockey. It was nice to see him in a game, he hasn’t been in a game in a long time and he’s got a real good shot. He is a real good hockey player.”

Vancouver drew a little closer, making it 5-3 with 8:45 to go after Leslie went bar down on Tyler Brennan.

Following a timeout, Connor Bowie dug the puck out of a scrum and lifted it into a yawning cage.

The bad blood finally spilled over at the buzzer as Armstrong fought Justin Lies at the buzzer, ending what was a chippy affair.

Both teams tallied 29 shots on goal apiece while also posting identical numbers on the power-play, each going one-for-four.

“When you have a goalie like that, you have to get traffic and you need to get inside the D and get second and third opportunities and we did that,” added Lamb.

The Cougars (2-2-1-1) reacquaint themselves with Vancouver on Monday at 7pm from Sandman Centre.

You can catch all the action with Fraser Rodgers on 94.3 The Goat.

Jonny Hooker nets four points, and Tyler Brennan secures a win in his final game before the world U18 tournament. An exciting one from start to finish!#NorthernUprising #WHL pic.twitter.com/RNgnZcG3mS