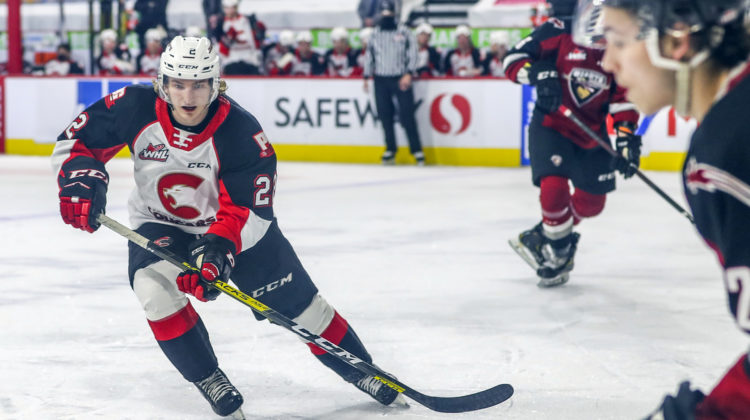 It was a night to remember for Craig Armstrong.

The 17-year-old from Airdrie, Alberta scored all four goals for the Prince George Cougars securing a 4-1 win over the Vancouver Giants on Monday from the Sandman Centre in Kamloops.

“He can grind it out and now he is getting some scoring touch, which he’s had and is one of the reasons why he was drafted so high and it’s starting to come together for him,” said Mark Lamb, Cougars Head Coach and General Manager.

After a pair of missed breakaways from Tyson Upper and Kohen Ziemmer early in the opening period, Armstrong delivered the ice-breaker at the 13:00 minute mark capitalizing on a Kyren Gronick feed to make it 1-0.

The magical night continued in the second period as Armstrong rifled home a Jack Sander feed to double the margin to 2-0.

He completed the natural hat-trick four minutes later on the power-play redirecting a Hudson Thornton point shot to extend the advantage after 40 minutes.

“When I got back home after my rookie season, I took a really hard look at my game and I knew I needed to work on a lot of things and I think I put in the hard work in doing that. Playing with Kyren and Heidt, they are two skilled players. We were moving the puck well and it was one of those nights everything was working for us,” added Armstrong.

Are you ready for a HAT TRICK COMPILATION 🎩🎩🎩!!

Craig Armstrong 💪 has a natural hat trick and the @PGCougars are up 3-0 in the #REMAXHUB pic.twitter.com/k694eMX6LY

The Giants came out swinging in the third period peppering Cougars netminder Taylor Gauthier who was forced to make a number of key saves to keep PG in front.

However, his shutout bid was dashed by Tristen Nielsen who went bar down cutting the lead to 3-1.

“We knew they were going to give a hard push in the third and it gave us a lot of hard times but Gauthier was there for us when we made some mistakes and he made some big saves so we could end up with a big win,” added Lamb.

He mentioned his young team, which has 10 rookies on it, gained some valuable experience while defending a sizable advantage.

“You can’t get that experience unless you do it. You can talk about it all you want really but until you are into the guts of all that and feel it. The whole team is experiencing that.”

Armstrong put the exclamation mark on his career night lifting the puck into the empty net.

This was the first four goal performance from a Cougar player since Josh Maser did it in January of 2018 against Vancouver. His counterpart, Ty Ronning, potted three for the Giants in the same game.

The Cougars have two hat-tricks this season from Armstrong and Connor Bowie – this is the first time two different players have scored three goals in a game since 2017-18.

Craig Armstrong scores all our goals, and we sweep the doubleheader vs the Giants. A night to remember. pic.twitter.com/appg9hLr8e

15-year-old Riley Heidt chipped in with a pair of assists while playing with Gronick and Armstrong.

The Saskatoon product also had a masterful night in the faceoff circle winning 12 out of 14 draws.

Tyler Brennan is done for the season as he is completing a mandatory five-day quarantine before flying to the World U-18 Men’s Hockey Championship in Texas to join Team Canada.

This means, rookie Ty Young will assume the back-up goalie duties for the Cougars.

With nine games over the next 16-days, Lamb says it’s more than likely, the 16-year-old will get a look-see.

“We need to see him also. He’s working very hard in practice and it will be nice to get him in a game for sure.”

Next up for the Cougars is a date with the Kamloops Blazers on Wednesday at 7pm from Sandman Centre.

You can catch all the action with Fraser Rodgers on 94.3 The Goat.