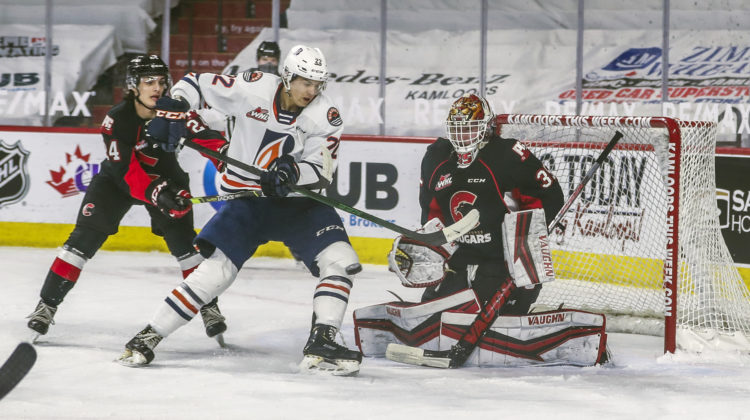 The Prince George Cougars thought they were too big for their britches and it cost them dearly.

Led by a three point effort from Josh Pillar, the Kamloops Blazers made mince meat out of the Cats securing a 5-0 victory from the Sandman Centre on Wednesday.

“We weren’t ready to play and we didn’t compete. It’s as simple as that.”

“If you are going to let them skate around and do whatever they want (Kamloops) and outwork, outhit and outskate you that is exactly what is going to happen – they are a really good hockey team,” added Lamb.

Pillar scored his first of two goals in the contest at the 8:06 mark of the first period, capitalizing on a charging penalty from Cougars defending Keaton Dowhaniuk, leading to a successful power-play.

Miraculously, PG kept it clean for the majority of the second period until Daylan Kuefler notched his first of the shortened season with 25 seconds remaining past Taylor Gauthier to double the Kamloops edge to 2-0.

Go to the net and good things happen! Right @DaylanKuefler91?

The Blazers had the puck on a string for the final frame, which eventually opened the floodgates.

At the 3:16 mark, Swiss international Inaki Baragano rifled a point shot past Gauthier to extend the lead to three.

“We didn’t come out from the start. I don’t think our preparation was there and it surely showed. It definitely wasn’t enough,” said Jack Sander, Cougars captain.

“Everyone needs to find a pulse out there and figure out that you can’t win in this league when you’re playing easy and not stick checking and going for pucks.”

Pillar continued the offensive onslaught lighting the lamp for the second time at even strength, capping off a three-way scoring play from Quinn Schmiemann and Connor Zary.

To add insult to injury, Caden Bankier collected his fourth of the campaign on the man advantage from Pillar and Orrin Centazzo.

When asked if the loss was a sign of immaturity from a team with 10 rookies on it, Lamb wasn’t quite ready to play that card.

“No, I am not going to go there. We know what we’ve got, and you have to be ready to play every game.”

The blowout loss to the Blazers comes 13 days (April 1st) after the Cats dropped a 6-1 decision to their BC Division rivals.

With two flat outings against the same team, Lamb lamented this is not a “burn the tape” kind of scenario.

“This isn’t one of those games (Wednesday). I thought the last one might have been one of them but when it happens back to back against the same team it’s not a burn the tape kind of a game, this is something you have to dive into it.”

As a final exclamation point, Kamloops outshot the Cats 20-2 in the final 20 minutes.

“When you are not ready to play, you play undisciplined. That’s when you need leaders, we didn’t have any. We had a bunch of followers who were following in the wrong direction,” added Lamb.

The Blazers went 2-for-6 on the power-play while Cougars went 0-for-3.

If you are looking for small victories, Gauthier cracked the 4,000 save mark for his WHL career in defeat.

In addition, he and Zary represented Canada at the World Junior Hockey Championships in Edmonton over the Holiday Season, collecting silver medals.

The Cougars were without netminder Tyler Brennan who will miss the remainder of the season after joining Team Canada for the U-18 World Men’s Hockey Championship.

The Cougars (3-3-1-1) kick off a busy stretch where they play three games in four nights starting on Friday against the Victoria Royals (1-6-1-0) at 7pm from Prospera Place in Kelowna.

“We didn’t expand a lot of energy tonight so we should be ready to go but we’ve got some things to fix that’s for sure. You have some success and it really tricks you. You have to reset, focus and be ready to play a hard game and we weren’t.”