Failure to launch: sloppy Cougars come up short against Rockets 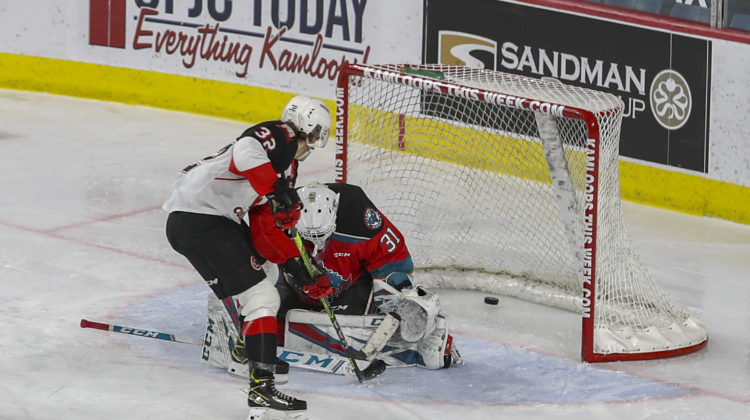 While it might not have been bowling shoe ugly, it was darn near close.

A four-goal performance by Trevor Wong enabled the Kelowna Rockets to slip past the Prince George Cougars by a 7-5 score on Saturday from the Sandman Centre in Kamloops.

PG was on their heels right from the opening puck drop, as Wong ripped home a Jake Poole feed past Ty Young who was making his first career WHL start.

“We couldn’t match their physicality or intensity and looked faster and bigger than us tonight. We had a pretty good push in the third but when you are behind like that and you are chasing the game so hard it’s just a bunch of mistakes.” said Mark Lamb, Cougars Head Coach and GM.

After Koehn Ziemmer evened the game at one apiece, 15-year-old Andrew Cristall deflected a blast from Elias Carmichael to give Kelowna a 2-1 edge after 20 minutes.

However, the Rockets were also in a giving mood as Fischer O’Brien notched his first WHL goal on a shorthanded breakaway past Cole Schwebius.

Wong completed his hat-trick shortly after, slapping home another Poole feed to extend the advantage to 5-2 at the second intermission.

After Wong’s fourth of the contest, the Cougars decided to wake up from their cat nap and mounted a mini-comeback of sorts.

It all started with Keaton Dowhaniuk’s second goal in as many nights knocking him a loose puck at the top of the Rockets crease.

Kyren Gronick got in on the action, later on in the third period scoring back to back markers whittling the Kelowna lead down to 6-5.

The comeback bid fell short as Mark Liwiski scored an empty-netter to give the Rockets (2-1-0-0) their first win since March 26th against the Victoria Royals.

“When you look at this game, it was our young guys that were pushing. I don’t look any farther than that. They were pushing, they got us back in the game – we need some guys to step up, guys that have been around here and take charge to settle the game down.”

“That’s where our problem is,” added Lamb.

This was also the first game action for Kelowna in nearly three weeks after team activities were paused due to several COVID-19 cases among players and personnel.

Lamb criticized his team for not playing tighter in front of Young who allowed six goals on 34 shots.

“Right from the first shift, if you are going to start like that (allow an early goal) we put ourselves on our heels. We knew how they were going to come out, they had been pent up for a couple of weeks they wanted to play hockey. They (Kelowna) were hooting and hollering, scored on the first shift and didn’t look back.”

“He (Young) battled the whole night, he didn’t need to come out at all, it was everybody in front of him. Some of our leaders and older guys have to take the bull by the horns and you could see how I started the third period on the power play with all of our leaders and then bang it’s a shorthanded goal (for the Rockets).”

“There is no problem with him at all. He got his feet wet, everyone goes through the first game and I think it was a success for him.”

In nine out of the ten games this season, PG has given up the first goal, contributing to the team’s slow starts – a trend that needs to change according to captain Jack Sander.

“All across the team, we don’t have guys going and regardless of age when we need to show some leadership, accountability and be ready to play.”

The Rockets outshot the Cougars 35-28.

PG was 2-for-6 on the power-play but also allowed three shorthanded goals.

Kelowna went 0-for-5 on the man advantage and also gave up a pair of goals to Cougar penalty killers.

Local product and former Cariboo Cougar Scott Cousins collected his first point in the WHL – an assist on Wong’s second of the contest.

You can listen to the game on 94.3 The Goat with Fraser Rodgers.

We had goals. We had saves. We EVEN had shootouts! pic.twitter.com/HYrKFkv6qd