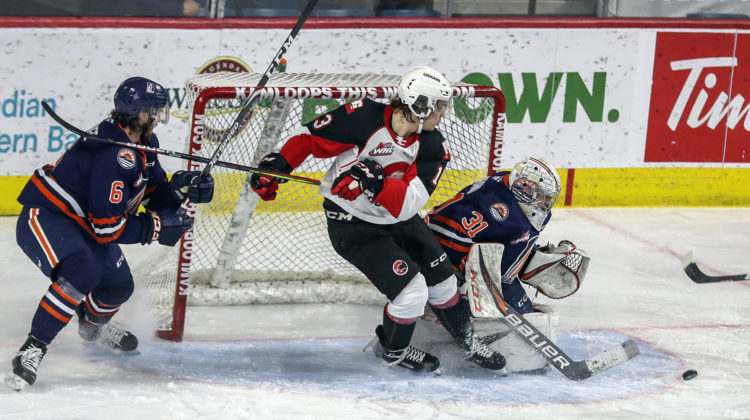 Sometimes the harder you try to break out of a funk, the worse it gets.

For the Prince George Cougars, their mistakes came at the worst possible time.

A three-goal third period from Matthew Seminoff, Connor Zary and Reese Belton cemented a 4-1 victory for the Kamloops Blazers on Thursday from Sandman Centre.

“We played a good 40 minutes but if you want to win in this league you got to play a full 60. We got away from our details, they weren’t there in the third period and that cost us the hockey game,” said Connor Bowie, Cougars forward.

The Cougars delivered the first blow of the contest as Bowie deflected a point shot from Ethan Samson securing a 1-0 lead after 20 minutes.

We’ve got a goal in the #REMAXHub 🚨

PG dominated the play for the vast majority of the second period outshooting the Blazers by a 21-6 margin.

“We did a lot of good things, their goalie made a lot of saves. We hit him (Garand) with a lot of high end pucks and had a lot of Grade A scoring chances and didn’t score. Two of the goals they scored in the third (Kamloops) we had the puck on our stick and delivered a mental mistake and it ended up in the back of our net,” said Mark Lamb, Cougars Head Coach and General Manager.

“Those are tough to take and again, I feel we gave that game away.”

The tide began to turn in favour of Kamloops courtesy of a Inaki Baragano blast that handcuffed a sprawled out Taylor Gauthier to even the score at 1-1.

“Anytime you give up a goal late it gets to you for sure and that is something you can’t be doing and it slowed us down a bit in the third period,” added Bowie.

During the play, Gauthier lost his goal stick and was unable to establish position.

From there, the Blazers found another gear and lit the lamp on three consecutive occasions in the third period, improving their record to 9-2-0-0 inside the BC Division Hub.

On the flipside, this is the third consecutive loss for the Cougars who drop to 4-6-1-1 with ten games remaining in their shortened WHL season.

“What’s hindering us right now is that big mistake at the wrong time and then when you do make a mistake we need guys to clean that up,” added Lamb.

“Whenever you get frustrated in hockey, if you don’t handle it well and let frustration seep in it goes right through your team but I hope there is some real frustration going on after the loss.”

The Cougars are 0-4 against Kamloops this season, outscored 20-6 in the process.

Blazers netminder Dylan Garand was named the game’s first star thanks to a 43-save performance.

He, Gauthier and Zary were all teammates during the World Juniors in Edmonton with Team Canada.

It’s another quick turnaround for the Cougars who prepare for a rematch against the Kelowna Rockets tonight (Friday) at 7:05 from Prospera Place.

You can catch the game on 94.3 the Goat with Fraser Rodgers calling all the action.