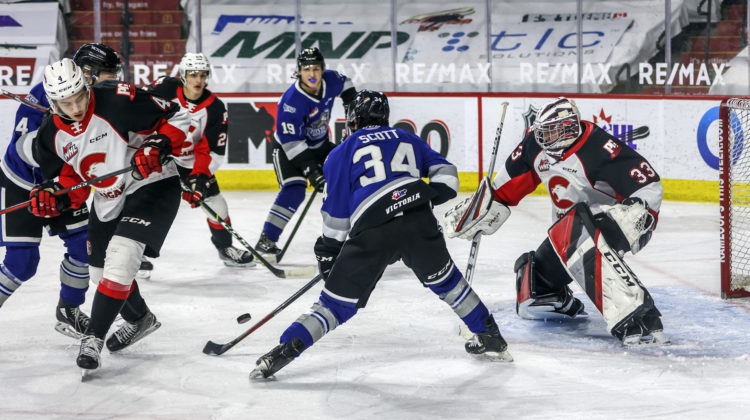 Brayden Schuurman scored at three minutes into overtime on Friday as the Victoria Royals edged the Prince George Cougars 2-1 at Sandman Centre in Kamloops.

Almost like a broken record, the Cougars got off to a slow start as Brandon Cutler tickled the twine at the 17:48 mark of the first period beating Ty Young who was making his second career WHL start.

“We didn’t set the tone at all, we weren’t ready to play and we had to regroup. Sometimes that happens but in hockey you have to be prepared right from the start all the time and then we started playing uphill,” said Mark Lamb, Cougars Head Coach and GM.

“We battled back. We had some good scoring chances and overtime is hard for us. We turned the puck over, didn’t defend and it wound up in the back of our net.”

PG cranked up the pressure in the second outshooting the Royals 12-6, despite the absence of forwards Jonny Hooker (suspension), Kyren Gronick (injured) and Brendon Boyle (injured).

But, they ran into a brick wall named Adam Evanoff who continued to turn away the fierce pressure.

Evanoff had to be equally as spectacular in the third gobbling up 14 of 15 attempts.

Like the old saying, if at first you don’t succeed, try, try again, Tyson Upper finally found the icebreaker for the Cougars, jamming home a loose puck at the side of the Victoria net evening the game at 1-1.

“We need to get more bodies to the net, we need to crash it more and get a dirty one,” added Upper.

Tie game between Victoria and @PGCougars in the #REMAXHub!

At the end of the day, Evanoff was named the game’s first star due to his 40-save performance.

PG outshot Victoria 41-23 – including a combined 27-9 spread in periods two and three.

Ty Young of the @PGCougars gets jussssssst enough of this puck! pic.twitter.com/0N2X26GGtS

The Royals went 1-for-5 on the power-play while the Cougars failed to light the lamp on a pair of opportunities.

Both Victoria (2-13-1-0) victories have come in overtime against the Cats.

The first one occurred on April 6th in Kamloops where Anaheim Ducks prospect Brayden Tracey scored the game-winner.

Puck drop is at 5pm and you can listen to the action on 94.3 The Goat with Fraser Rodgers.

Well, time to start a new streak Sunday. Checkout the @hkygivesblood recap on our 2-1 overtime loss to Victoria.#REMAXHub #WHL