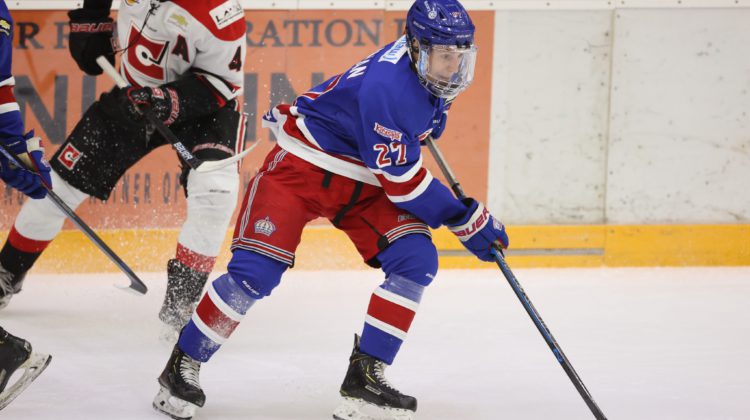 Simply put, the Merritt Centennials were sick of losing to the Prince George Spruce Kings.

Thanks to a four-point effort, Ben Ward willed the last-place Cents to a wacky 6-5 victory on Saturday inside the BCHL’s Chilliwack Pod.

PG got off on the right foot courtesy of Christian Buono who broke loose shorthanded once again, handcuffing Colton Phillips-Watts for a 1-0 advantage.

Both would continue to exchange goals in the second as Amran Bhabra’s lazy wrister inside the Merritt blueline found its way past Phillips-Watts.

Ward replied eight minutes later for the Centennials keeping the Pod cellar-dwellers on even terms.

In the third, defence was optional as the game turned into a glorified track meet.

Simon Labelle jammed home a loose puck to put PG back on top – albeit temporarily.

It didn’t take long for Merritt to throw a counterpunch as Ochitwa found the back of the net for the second time followed by a Trevor Isaksson marker over a minute later giving them a 4-3 lead.

The goal fest continued as John Herrington put the Spruce Kings back on even terms at the 6:20 mark.

A loose defensive sequence proved to be the back breaker for the league’s most northern franchise as Walker Erickson lit the lamp twice in the span of 20 seconds.

Rowan Miller brought PG back within one with over eight minutes remaining but couldn’t secure the equalizer with Fairlie pulled for the extra-attacker in the dying minutes.

Merritt defeats the Spruce Kings for the first time in eight attempts this season while improving to 3-13-0-0.

Ochitwa, Brandon Dent and Blake Astorino who all grew up in the northern capital, combined for four points.

PG grossly outshot the Cents 51-23, including a 40-16 spread over the last two periods.

Phillips-Watts, who is from Quesnel, turned aside 46 shots for Merritt.

With four games remaining, Prince George (11-4-0-1) maintains its three-point lead over the Chilliwack Chiefs for top spot in the division.

Next up for the Spruce Kings is a Monday matchup against the Chiefs (10-6-0-0) from the Coliseum.