Ziemmer’s hot hand lands Cougars back on the winning track 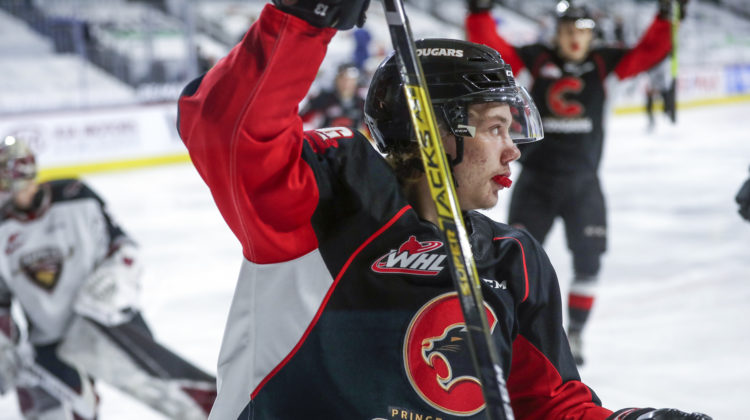 The bigger they are, the harder they fall.

A three-goal first period explosion allowed the Prince George Cougars to pounce against a tired Vancouver Giants squad, enroute to a 5-2 victory on Sunday from the Sandman Centre in Kamloops.

“They (Vancouver) played last night so that was one of the messages that was starting fast and we got off to the start we wanted, which included excellent goaltending and that helped us through the rest of the game,” said Mark Lamb, Cougars Head Coach and General Manager.

🔥 Rookie Koehn Ziemmer starts the @PGCougars off hot tonight in the #REMAXHub! pic.twitter.com/JvX5yY9XGw

Koehn Ziemmer got the party started for the Cats less than two minutes in by firing a rebound past Giants netminder Trent Miner for an early 1-0 lead.

The Cougars kept their foot on the gas pedal as Craig Armstrong found the back of the net completing a three-way passing play from Tyson Upper and Ethan Browne.

Ziemmer continued to flaunt his goal scoring touch lighting the lamp for the second time in the period for a sizable 3-0 Cougar, forcing Vancouver Head Coach Michael Dyck to call a timeout.

Koehn Ziemmer scored 9 points in 3 games with @RaidersAAA earlier this season and has not slowed down. The @PGCougars burgeoning star’s second of the night showcases that skill 🤹 #WHLHoN | @CHLHockey 🥅 pic.twitter.com/cYjib7LhXL

Lamb was quick to credit the 16-year-old, who is already showing signs of becoming an elite power-forward in the WHL.

“He does a lot of good things. He can really score, and loves to score goals and you can tell that when he shoots the puck through the back of the net and besides his goal scoring, he can play heavy out there and goes right into traffic.”

“What he can be in this league is going to be something special.”

Following the timeout, the Giants found their offensive mojo courtesy of Tristan Nielsen who went bar down on PG netminder Taylor Gauthier.

In the second, the Cats picked up right where they left off as Upper tickled twine less than a minute in, ending the evening of Miner who was chased from the crease after allowing four goals on nine shots.

The Cougars bottom-six forwards carved out some offensive success of their own as Blake Eastman scored his first of the shortened season from Carter MacAdams extending the lead to 5-1.

The 17-year-old from Ardrossan, Alberta was glad to finally get the monkey off his back.

Even though Eastman has just four points in 17 games, he believes his development along the lower-third of the ice has grown by leaps and bounds.

“I put on some weight over the summer to try and use my size more. I realized it is a key factor in the game and change the way you play and it’s made my game so much more exciting than last year and makes the game so much better.”

Nielsen added his second of the game at the eight minute mark of the third period to make the score a little more respectable for Vancouver who drops to 10-8-0-0 on the season.

🔥 @tristen_080 on a hot streak as he records his second goal of the game for the @WHLGiants in the #REMAXHub! pic.twitter.com/6E96fX8xM1

Meanwhile, the Cougars found their way back to .500 sitting with a mark 7-7-2-1 with five games remaining inside the BC Division Hub.

“All of our young kids have a lot of skill so you have to play detailed hockey and that is what all of these kids have to learn in order to win. You have to be able to play without the puck and if you want to move on that is the biggest thing with these kids.”

“But, when they have the puck I let them do what they want with it. We have a lot of skilled kids like that still coming,” added Lamb.

Both teams went a combined 0-for-8 on the power-play.

Gauthier made 29 saves in the victory.

PG is back in action on Tuesday when they take on the Kelowna Rockets (8-2-1-0).

“They are a big, heavy team and when they get in on the forecheck, they are tough to handle so we have to be right on the mark with our puck management and make the good plays. If they get cycling and move the puck around, they will be a big problem for us,” mentioned Lamb.

Puck drop is at 7:05 from Prospera Place.

You can catch the action on 94.3 the Goat with Fraser Rodgers calling all the action.

Snipers were in the building tonight. pic.twitter.com/gdR4g8gw0u