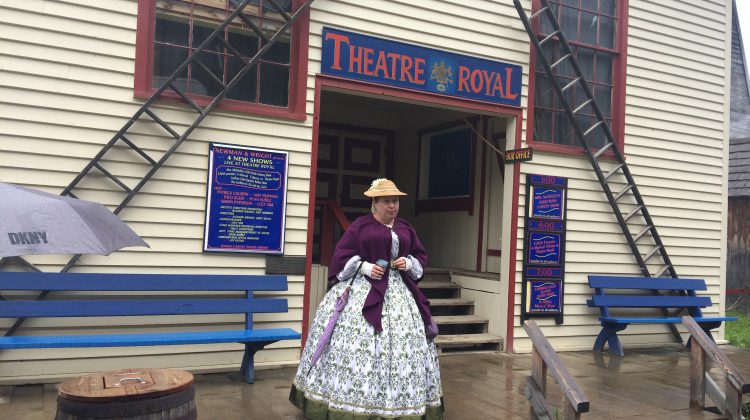 The Public Program Lead with Barkerville stated they have received $631,000 through the Community Economic Resilience Infrastructure Program for a new foundation.

“For years now we’ve known that the Theatre Royal in Barkerville was in desperate need of a new foundation. It’s been probably more than 40 years now since the foundation was done and the building is really old, so it’s getting to that point where in order to just keep it up we needed to get some serious money invested,” said James Douglas.

He believes the timing is impeccable.

“Because of the pandemic, there wasn’t going to be a Theatre Royal show this season at all, just like there wasn’t last year. We cannot bring people into the theatre in a closed environment with actors on stage singing and dancing just due to the potential transmission of COVID-19, so the building was going to be closed this season anyway.”

“We’re going to use it as a nice interpretive opportunity because of course, while the interpreters in Barkerkille are anchored in particular historical years, they have always had the ability to talk about things that are going on in the entire history of Barkerville. So it’s a great opportunity to talk about the theatre and its history while our guests are actually watching the renovations take place.”

Speaking of history Douglas was asked if the Theatre Royal was the oldest theatre in the province.

His answer was “In essence yes but not entirely so.”

“The history of the Theatre Royal is that that building was originally built, not the building that we have now, but the original Theatre Royal was built in 1869, right after the great Barkerville fire of 1868. And it was actually a joint production between the Cariboo Amateur Dramatic Association and the Williams Creek Fire Brigade. They built a large two-story building. The first floor of that building was used as storage for the fire brigade and the second floor had a small theatre built into it, and that’s where the Cariboo Amateurs would do their performances”

According to Douglas, the building was eventually surrounded and engulfed by mine tailings that had been coming down from the hills every spring with the runoff to the point where people could actually walk off the street right onto the second floor.

He mentioned they eventually jacked up the building to put a new first floor underneath it, although it was eventually torn down.

The replacement burnt down in the 1930s, and then the building people enjoy today was built as a replacement a decade later.

Barkerville opens to the public on June 26th.