Third time’s the charm: Shorthanded Cougars blast off against Rockets 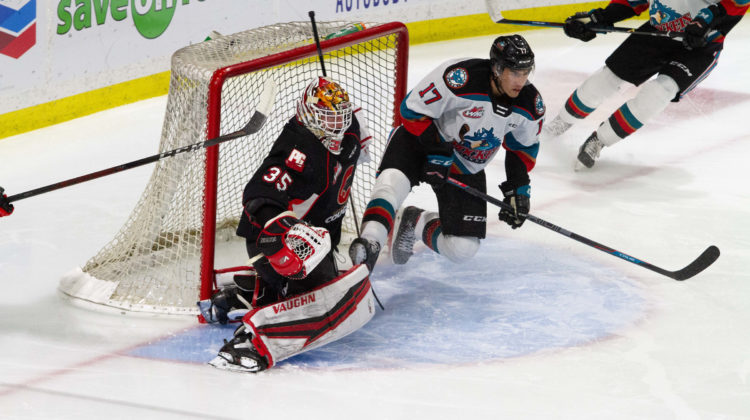 Despite being down four forwards, the Prince George Cougars came up with their grittiest effort of the season.

Connor Bowie and Koehn Ziemmer each potted their seventh of the shortened campaign in a 2-1 win against the Kelowna Rockets Tuesday at Prospera Place.

Ziemmer opened the scoring at the 7:08 mark of the opening period coming off the far half wall, backhanding a floating puck past Rockets netminder Cole Schwebius for a 1-0 lead.

In the second, the Cougars continued their patient yet aggressive approach on the forecheck as Bowie cashed in on the penalty kill, taking full advantage of a 2-on-1 rush.

We got a shorty in the #REMAXHub!@PGCougars Connor Bowie hits the 🎯 pic.twitter.com/hGsuREyEdo

Even with the offensive success, veteran goaltender Taylor Gauthier came up huge once again stopping 29 Kelowna shots – 21 of those occurred over the final two periods.

However, his shutout bid was shattered at the 15:38 mark of the third period when Mark Liwiski turned and fired a wobbly puck through the armpit of Gauthier to draw the Rockets within one.

Kelowna went 0-for-5 on the power-play while PG failed to score on three opportunities.

The Cats dressed all eight of their defencemen due to the absence of Ethan Browne (injured), Kyren Gronick (injured) and Brendan Boyle (injured).

Jonny Hooker also missed the contest as he served the third of his four-game ban in relation to his open ice hit on star Kamloops Blazer forward Connor Zary who has not played since.

PG improves to 8-7-2-1, one point back of the Vancouver Giants for second place in the BC Division.

The Cougars are 4-0-1 in their last five games.

Both teams will renew hostilities tonight (Wednesday) in Kamloops at 7:00pm from Sandman Centre.

PG has won three out of five meetings against Vancouver this season.

You can catch the action on 94.3 the Goat with Fraser Rodgers.