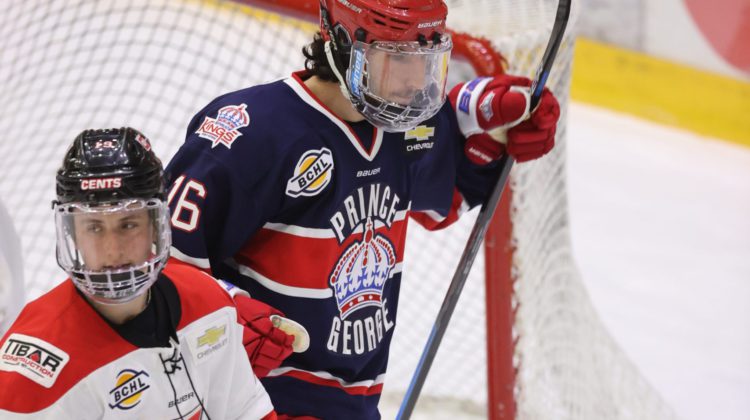 After a brief two-game slide, the Prince George Spruce Kings found themselves back in the win column.

First period goals from Linden Makow, Hunor Torszok and Christian Buono paced the BCHL’s most northern franchise to a convincing 5-1 win against the Merritt Centennials inside the Chilliwack Coliseum.

Torzsok recorded a goal and an assist against his old team and asserted his place among banged up forward group.

“I got some opportunities on the power-play and the boys were shooting the puck a lot and I did my job in front of the net and good things happened today.”

In the second, PG continued to up the ante offensively as Rowan Miller and Mason Waite extended the lead to 5-0 after 40 minutes.

With two games remaining, the injury list seems to be getting longer at the worst possible time.

The Spruce Kings were without forwards Andrew Seaman, Kilian McGregor-Bennett, and Max Borovinskiy.

In addition, Carter Cochrane left the game in the second period and did not return.

“When we are five-on-five we are a really good team, getting under sticks and laying into bodies. I think we are really good with that stuff so we just have to keep it simple, once we start making mistakes in the neutral zone that’s when stuff hits the fan,” added Buono.

“I think we are trying to control the controllable right now and focus for the next game to get that win and we’ll go from there. Obviously, we want to get first place in the pod and that’s what we are focused on,” added Torszok.

Brandon Dent, Alex Ochitwa and Blake Astorino of PG all play for Merritt (3-15-0-0).

PG plays the Cents for the final time this season on Friday at 5pm.