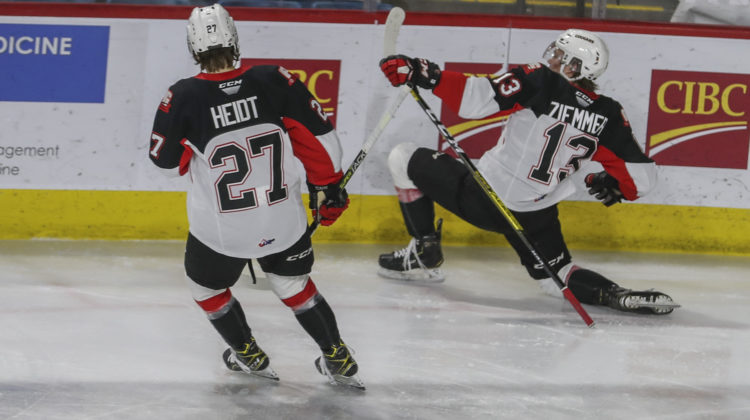 Koehn Ziemmer showed he is a budding WHL star racking up two more goals against the Vancouver Giants in a 3-0 shutout victory on Wednesday from the Sandman Centre in Kamloops.

“He’s turning into a very special player. He is growing as we have gone along here and I like a lot of the things guys did away from the puck. We were sharp, our goalie was great again and it was one of those hard, gritty games,” said Mark Lamb, Cougars Head Coach and General Manager.

For the second consecutive night, the 16-year-old Alberta product potted the icebreaker – this time at the 4:36 mark of the middle period where his individual effort fooled Vancouver netminder Drew Sim.

Ziemmer followed that up thirteen minutes later with a strong power move out of the near Giants corner before turning and rippling the mesh to double the PG lead.

The Cougars locked it down in the third period, allowing only eight Giant shots to reach the crease of Taylor Gauthier.

“We did a good job the last two period of limiting the chances and clearing out our net front and getting those rebounds. I think I did a good job of placing pucks in the right areas to eliminate those second chances”

Tyson Upper provided the exclamation point for the Cats as he slipped the puck into the yawning cage as the Giants pulled Sim in favour of the extra-attacker.

PG has beaten Vancouver in four of the six meetings in the shortened WHL season.

“You can’t put your finger out and it’s just weird how that happens. I have had that happen the other way where you outplay a team and they just have your number. There is just no right answer for that. That is a good hockey team over there and I am assuming they are thinking the same way about us.” added Lamb.

This kid is UNSTOPPABLE! @PGCougars – what are you feeding him? 🤔 pic.twitter.com/RnU1lru3pX

Ziemmer has five goals in his last three contests with four of them against the Giants.

The Cougars improve to 9-7-1-2 and move into second place in the BC Division.

Gauthier made 26 stops, with 20 of those occurring in the final 40 minutes.

This marked the 19-year-old’s sixth goose egg of his WHL career.

PG was forced to play shorthanded once again due to the injury bug and suspension.

Jonny Hooker served the last of his four game suspension in connection to his hit on Blazers forward Connor Zary.

Kyren Gronick, Ethan Browne, Brendan Boyle all sat out due to injury forcing the Cougars to dress all seven blueliners for a second straight night.

Local product Aiden Reeves saw a few shifts at forwards due to the thinning bodies.

“He did that last night too and did a very good job of it. That is not uncommon in the WHL. Versatility when you get hurt and when you have different things that happen to your hockey team you need guys to step up.” said Lamb.

Next up for PG is a Saturday showdown against the Victoria Royals (2-14-1-1).

Puck drop is at 7pm from Prospera Place in Kelowna.

You can catch all the action on 94.3 the Goat with Fraser Rodgers.