Royals intensity too much for lackadaisical Cougars 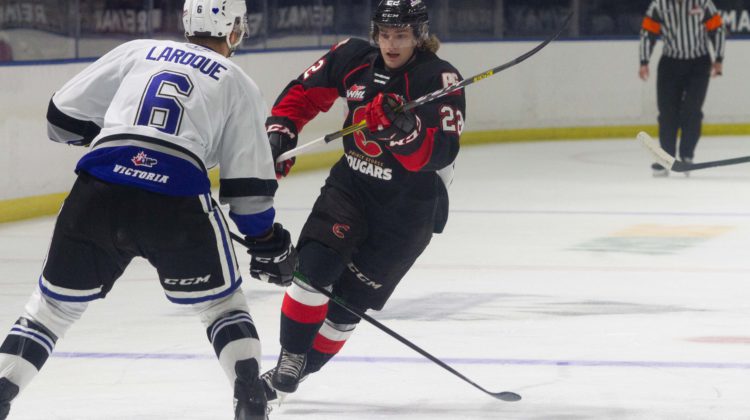 The Prince George Cougars might want to show up an hour earlier than normal the next time they line up against the Victoria Royals.

Another slow start for the Cats proved costly on Saturday as they fell 2-1 in Kelowna to the BC Division’s last place team for a third time this season.

“We played the same way as we practiced yesterday (Friday). It has a lot to do with the mindset, digging in and playing real hard. We probably got a little too happy with the way we have been playing as of late.”

Royals speedy overage forward Brandon Cutler drew first blood taking advantage of a turnover inside the Victoria blueline during a Cougar power-play, tucking the puck underneath the pad of goaltender Ty Young at 5:24 of the second period.

“You’ve got to play 60 minutes. We weren’t ready to compete at the start and do all the things that we have been doing to win hockey games and it was very evident. I thought our goalie played very well and it’s too bad we couldn’t do more for him,” added Lamb.

Connor Bowie pulled the Cougars within one before the intermission tapping home a Jonny Hooker feed past Royals netminder Adam Evanoff.

This was Hooker’s first game back since serving a four-game ban following a hit on Kamloops Blazers forward Connor Zary.

The @PGCougars were on the hunt for a goal and @CBowie09 tracked one down on the rebound! #REMAXHub pic.twitter.com/P18B6msJHz

PG outshot Victoria 34-21 overall, including a 15-9 margin in the third period but were unable to get the equalizer.

“It’s one thing to have a talk back in the room and get the motivation there but guys have to find ways to be ready for puck drop,” said Jack Sander, Cougars defenceman.

The Cats captain is honing in on his final two games in the Western Hockey League (Sunday against Kelowna, Wednesday versus Kamloops).

Sander admitted certain memories are flooding back to him.

“I think I have taken a lot of time to just appreciate the grind and struggle that I have gone through and appreciate every single second of it and to take those moments and lock them away in my brain. I am cherishing it but I will be ready to go for sure.”

The veteran blueliner was discovered by the Cats during the 2017 Telus Cup held at the CN Centre while playing for the Leduc U-18 AAA Oil Kings.

Former Cougars general manager Todd Harkins inked him to a contract shortly after.

If there is a positive from the loss, it would be the Cougars dominance in the faceoff circle from Bowie (16-of-19) and Riley Heidt (9-of-15).

However, PG was still without the services of Ethan Browne and Brendan Boyle.

The Cougars are back in action tonight (Sunday) against the Kelowna Rockets (8-4-1-0) from the Sandman Centre in Kamloops.

Former Cariboo Cougar and local product Scott Cousins is a member of the Rockets.

Puck drop is at 6pm and you can catch the action on 94.3 the Goat with Fraser Rodgers.