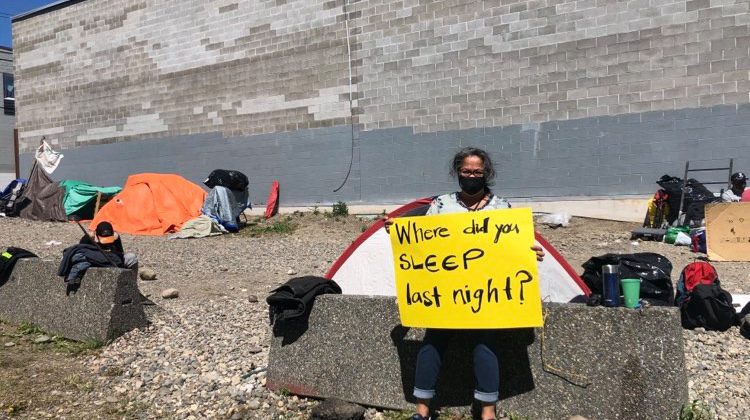 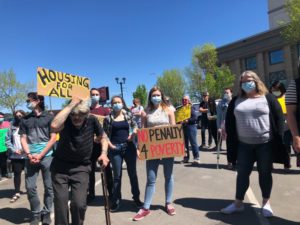 Attendees of the ‘Together We can Protest’ (Photo by Dione Wearmouth, mypgnow.com)

Around 60 people gathered in front of the Prince George Courthouse this afternoon (Friday) to advocate for more available resources for the local homeless population.

Attendees gathered at the “Together We Can Protest”, to listen to speakers with first-hand experience of homelessness and other local community members that work in various outreach programs across the city.

People stood in solidarity with the local homeless population, carrying signs reading various sayings such as, “Shame on you, PG! Worse than a refugee camp”, “Housing for All!” and “No Penalty for Poverty!”

Three days ago, Kathy Hutchison, a Registered Nurse decided to organize the event after she had found out those living in the tent city on George Street were being kicked out.

“We want the city to either let them stay here or give them another place to go that’s safe and that has the resources they need to live,” explained Hutchinson. 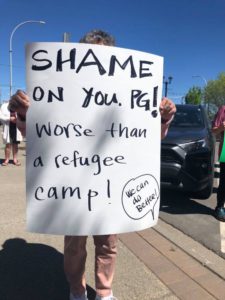 Attendee of the ‘Together We can Protest” (Photo by Dione Wearmouth, mypgnow.com)

She says they’re also demanding public toilets become available for homeless people to use and an accessible water source.

One attendee named Emmajade, says she attended the event to stand in solidarity with those facing homelessness.

“The more that we stand together, the more we are going to do to get these problems solved, it’s really sad that there are people in our community that doesn’t have those safety resources that we have,” she explained.

Hutchison says she hopes that this public display will result in open conversations with city officials on how to address accessibility issues for Prince George’s homeless population.

“We are in discussion with the owner on this piece of property to possibly secure this land for them and possibly get the city to share some land as well.”