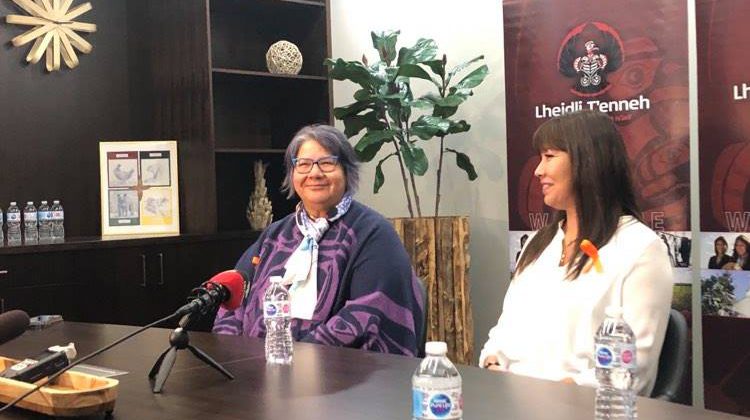 Chief Archibald decided to visit Lheidli T’enneh territory to get a better understanding of the issues facing the local Indigenous population and to discuss the province’s announcement of the details surrounding the efforts being made to dig up former residential school sites across BC.

The province announced communities located around the former residential schools, which are being labelled as ‘caretaker communities’ will have access to funding to support research into uncovering these sites.

During which, Chief Logan announced that the community has plans to utilize the $475,000 in available provincial funding to uncover the grounds of the former Lejac residential school outside of Fraser Lake.

“I think this funding should be available in every school across Canada because they are all crime scenes, they’re all babies that didn’t make it home and we’ve had our elders go out to visit Lejac and I’ve thanked Kamloops many many times for bringing this to light,” said Logan.

She says that taking this step is an important move for local Indigenous community members, noting that multiple band members and their family members were forced to attend either Lejac or other residential schools across Canada.

Chief Logan adds that the decision on what to do with the uncovered bodies will be up to the families of the lost children, but notes that it is important that these families have the chance to bring their loved ones home and bury them on traditional territory.

The provincial announcement from this morning (Tuesday) follows the federal government’s announcement in June that $27 million will be allocated for similar efforts on a national scale.

However,  Chief Logan shared concerns over whether or not the funding will be enough on both the national and provincial levels.

“The first thing I thought when I read the announcement was ‘was that enough to cover Kamloop’s cost? It’s scientific research, so there’s a lot of equipment involved and a lot of expertise needed. We’d have to ask Kamloops like what they’ve spent to date to make sure it’s enough to cover each school because each school is going to be different, each school has from 500 kids to thousands of children, so we just don’t know,” explained Logan.

Chief Archibald also wasn’t sure if this funding would be enough to support the research necessary to uncover these sites.