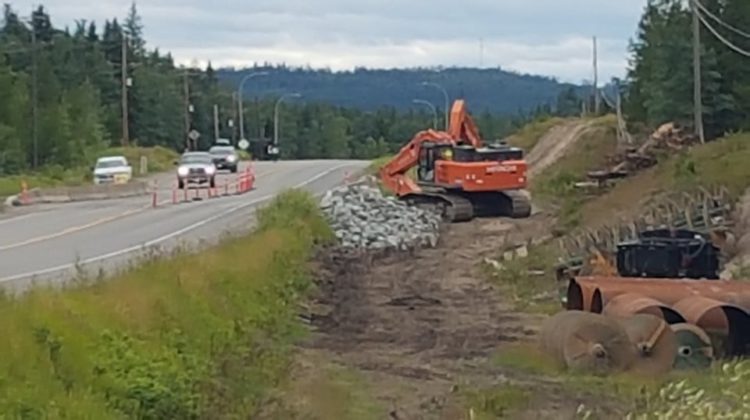 A section of highway 16 located west of the Beaverly Volunteer Fire Department has been proving to be an issue for motorists in the area over the last couple of months.

In early June, a section of the shoulder on the right-hand side of the road completely collapsed, which according to Yellowhead Road and Bridge (YRB) spokesperson George Merik, was caused by the spring weather conditions.

“Originally it was just a slough on the south side of the road, there wasn’t a lot of integrity with the material that was there, we were advised through geotechnical staff to support the large scarp that was there,” explained Merik.

Immediately after the collapse, YRB crews began working to stabilize the highway with rocks, but unfortunately, the first rehabilitation project was unsuccessful, and the shoulder collapsed again a few days later.

“It’s an emergency job and if we didn’t do what we did the highway could’ve just not been there one day so it would’ve been a rough ride to work,” added Merik.

A Kamloops-based tunneling company is now working to push a steel-walled pipe underneath the road to stabilize it.

A small crew of workers will be working on the site for the next month, meanwhile, motorists will be dealing with a decreased speed limit of 100km/hr to 30km/hr.

“The entire district of Fraser Fort George like between Vanderhoof and the guys out in Mcbride and even Quesnel, we’ve all had a pretty extraordinary year just with really saturated road bases,” explained Merik.

Merik says the project is still within budget.