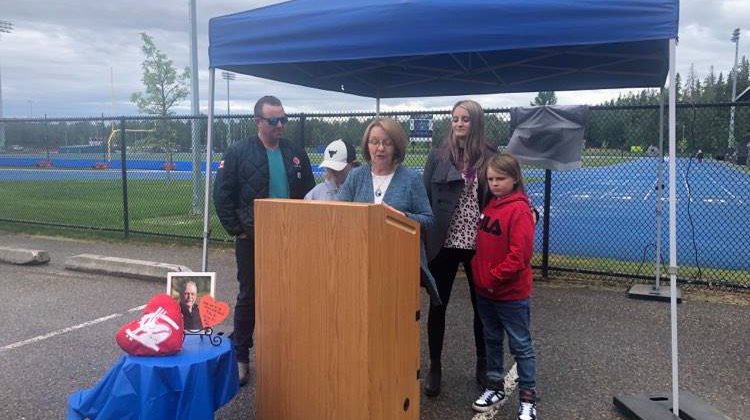 Prince George-Valemount MLA Shirley Bond unveiled the new equipment today (Thursday), which she believes is the first of its kind outside of the Lower Mainland, and will adhere to the special weather conditions presented in Northern BC.

“It’s a 24/7 AED. It’s an outdoor piece of equipment which will remain cool in the summer and warm in the winter so it will allow people if there is a sudden cardiac event at Masich Place no matter the season, to use it,” explained Bond.

The project stems from the work of the Prince George Community Foundation (PGCF), The Heart and Stroke Foundation, and the Bill Bond Memorial Fund.

They’re being placed in honour of Bond’s late husband Bill, who passed away from a stroke last June.

“My husband loved the Robson Valley and we spent a lot of our time together on the road and in those communities so we certainly plan two in Valemount and two in Mcbride, and then we’ll continue to look for locations where there are gaps. We want to make sure that they’re in places where the public can access them,” she added.

Acting City Mayor Garth Frizzell says the placement of this new equipment is particularly important because it is often used for strenuous physical activity.

“It’s really important that we have areas where people can get access to defibrillators because they work. It’s safe to use and if you use it within three minutes you have a much better chance of recovering so it’s really important in places where there are large populations are gathering,” said Frizzell.

According to Heart and Stroke Foundation spokesperson, Jeff Sommers, the chances of surviving cardiac arrest without CPR and an AED goes down by 7-10 percent every minute.

He adds having more AED’s in public spaces, especially ones available outside of business hours or in more rural areas is critical to saving lives and improving outcomes.

Frizzell added this project is a wonderful tribute to Bill Bond, who spent years working for the City of Prince George.

“He was a long time employee of the city, he helped build the city really and for his foundation to donate this with Shirley Bond, it’s a perfect fit,” Frizzell added.

“This is a really special day for us, my husband loved the community he lived in, we have an amazing family and it really is an honour to be able to recognize him today,” Bond said.

The PGCF will continue to support AED installation across the region and the Heart and Stroke Foundation, and donations to the PGCF can be made in honour of  Bill Bond.