Prince George Roller Derby league gets back on the track 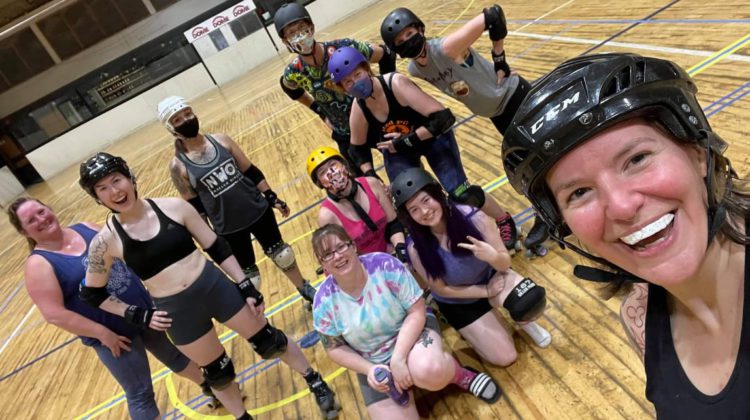 The Rated PG Roller Derby league is slowly returning to normalcy as some members of the league have begun returning to weekly practices.

On June 12th, players participated in their first practice since last fall, when they had a four-week stint of socially distant practices, which was cut short due to provincial restrictions.

Jamie Mault, who is also known as Nandicorn in the Roller Derby world, is a veteran player and president of the Rated PG Roller Derby club.

She says the league members are already ecstatic to be back on the track after being away from the game for so long.

“We’ve only been back for two weeks but we’re still really excited because we’ve not been able to skate for such a long time. Normally we take the summers off because of attendance, people are just doing other things, but since we’re now able to start skating we just wanted to start as soon as possible and get people engaged,” she explained.

Rated PG Roller Derby is divided up into four teams, the Rollergirls is their all-female recreational team, the Spruce City Roller Brats is the co-ed youth team, the Pulp City Woodpeckers is the co-ed adult’s team, and the internationally ranked competitive Northstars.

For the summer season, only the adult players will be practicing, focusing mainly on individual skillsets working without contact and conducting drills aimed at targetting skating skills and building up endurance.

However, Mault hopes the Spruce City Roller Brats will be able to return to practice in the fall.

“It’s been a long time since we’ve really been able to play Roller Derby and we’re so excited and just to see our friends again who we haven’t seen in so long it’s been great,” she added.

While Mault isn’t quite sure when they’ll be able to return to a regular game schedule, she says they’re hoping to get back into the full swing of things in the fall when restrictions are non-existent.

“Once we get people skating in the fall our first one (scrimmage) might be October or November, but honestly for when we get to play another team from out of time, I have no idea when that’s going to be. We might just have to wait and see how things are going with Covid,” she added.

The club is hoping to start welcoming new players with the new skater intake program in either September or October, which teaches the most basic skating skills to anyone interested in learning the game.

While the details on the initiation of the new skater intake program are still unknown, Mault says residents can keep an eye out on the Rated PG Roller Derby website and Facebook page to stay updated.