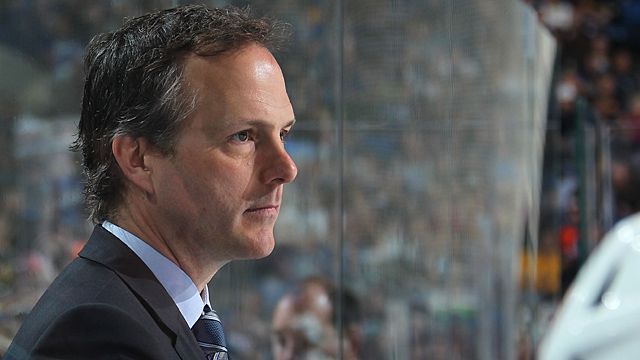 It’s been a quick rise to prominence for Prince George’s Jon Cooper.

The head coach of the Tampa Bay Lightning could literally walk on water these days after capturing back-to-back Stanley Cups.

Earlier this summer, Cooper added another feather to his cap after being named the head coach of Team Canada during the 2022 Winter Olympics in Beijing.

In an exclusive interview with Vista Radio, the 54-year-old was asked if he has now reached the pinnacle of his coaching career.

“I hope not,” laughed Cooper. 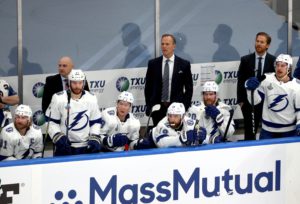 EDMONTON, ALBERTA – SEPTEMBER 23: Head coach Jon Cooper (C) and assistant coach Jeff Halpern (R) of the Tampa Bay Lightning look on from behind the bench in the second period of Game Three of the NHL Stanley Cup Final between the Tampa Bay Lightning and the Dallas Stars at Rogers Place on September 23, 2020 in Edmonton, Alberta, Canada. (Photo by Dave Sandford/NHLI via Getty Images)

Well before being named to the national program, Cooper and the Bolts had to exercise some playoff demons of their own.

After going 62-16-4 during the 2018-19 NHL regular season, the Lightning were unceremoniously dumped in four straight games to the Columbus Blue Jackets.

To add to that, Tampa along with the rest of the league would encounter more adversity the following season due to the COVID-19 pandemic.

The Lightning ended the year with a record of 43-21-6 before entering the Edmonton and Toronto hubs for the playoffs.

Led by Victor Hedman and Nikita Kucherov, the Lightning got past the Columbus Blue Jackets, New York Islanders, and Boston Bruins en route to the Stanley Cup Finals against the Dallas Stars.

Tampa Bay completed the mission winning the series in five games, marking a unique and special experience for everyone in the organization.

“It was a complete and unique situation playing in front of no fans and we really rallied in that year. Especially, after getting swept by Columbus the year before, it was a pretty determined group and they all just became kind of their own family,” said Cooper.

“It was phenomenal to be a part of that, especially the celebration after which there were no family or friends. It was just us and that is something I will never forget.”

Fast forward a year later, the Lightning had a tough road entering the 2021 NHL Playoffs after finishing 3rd in the ultra-competitive Central Division.

Thanks to some clutch goaltending from Andrei Vasilevskiy, the Lightning gutted out a six-game series win over their interstate rivals the Florida Panthers.

After dispatching the Carolina Hurricanes in five games, the Bolts narrowly escaped the New York Islanders in the Eastern Conference Final needing a 1-0 Game 7 victory on home ice to advance to their second consecutive Stanley Cup Final.

Superstars like Kucherov, Hedman, Brayden Point along with a slew of others pushed the Bolts to a convincing five-game series victory clinching Lord Stanley’s mug for the second time in as many seasons.

“You couldn’t ask for a better script like this one you got to experience with all of your loved ones, the city of Tampa and the fans who deserve this so much and stuck with us,” said Cooper.

We asked Cooper if one cup victory means more than the other given the difference in atmosphere.

“Don’t get me wrong, I would never take away the first one because it was such a unique experience and an intimate celebration but to top it off with the one with all of the fans is pretty special.”

While the star players rightfully get all the publicity, you can’t win the Stanley Cup without the right mix of character players.

Tampa had that in spades with the likes of Blake Coleman (now with Calgary), Pat Maroon, Yanni Gourde (now with Seattle), Ross Colton, Tyler Johnson (dealt to Chicago), and Eric Cernak.

“You need the supporting cast to be there for you. Ross Colton is going to be with us next year but the trio of Coleman, Gourde, and Barclay Goodrow was a huge line for us in kind of a supporting cast and we lost those players to free agency or expansion,” added Cooper.

“That is the price of winning and you want those guys to be in a situation to financially look after themselves.” 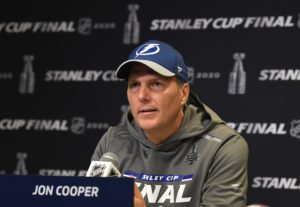 However, despite those losses, Cooper is confident the Lightning can go deep a few more times in the playoffs.

“I think we have lost a third of players who had played in the final game but to your point, we have kept our core. We kept our goalie who I think is the best in the world right now.”

“We kept our group of defencemen and some forwards like Nikita Kucherov and Brayden Point who are some of the best in the world. If they are the base to build around moving forward, and we can fill in the pieces around them, I think we have as good a shot as any in going for a third (Stanley Cup).”

Keeping players motivated after reaching the top of the mountain can be a challenge at the best of times, but Cooper believes the buy-in from the Lightning’s core group is proving to be a difference-maker.

“Once you have won once it can get remarkably easier because the players know and you’ve got something to fall back on if things don’t go your way.”

“You can’t play your best every single night, especially in an 82-game season – it’s just too tough with the travel. But, if you can keep your consistency and stick to what your beliefs are and what got you there usually good things will happen.”

“I think it is easier being the team chasing somebody than the team being chased. That’s why a lot of people say it’s harder to stay on top than to get on top. This was one of the big motivations for our group asking if we were done winning one because once you win one you kind of have a little bit of a reprieve. Our guys didn’t want to do that.”

Cooper also acknowledged the support of both his parents – especially his late mother who unfortunately passed away in the fall.

The 54-year-old stated that the first cup win in Edmonton was bittersweet in a way since his mom wasn’t able to be physically present.

Cooper still thinks fondly of his time in the northern capital whether it was from playing neighborhood street hockey or going to school.

“It was a great place to grow up in because it was a small city with a great feel. You got to walk to school every day from kindergarten all the way up into Spruceland and then going to Lakewood. It was just a great experience and it kind of molded me for what I am today.”

Cooper lives in Tampa year-round with his family and explained the local market has become ingrained with the Lightning organization.

“People don’t realize that before the pandemic, we were on 250 or 260 straight sellouts for our games. I mean that’s four or five straight seasons and so, it is truly a hockey town.”

As for the Olympics, if NHL participation ultimately gets the green light, Cooper is looking forward to possibly working with Montreal Canadiens star netminder and Anahim Lake product Carey Price.

“I got to know him a little bit during the 2018 All-Star Game when we hosted it in Tampa. I was the coach and he was on our team and he’s such a class individual. He’s from just down the street in the Williams Lake area.”

“I can’t sit here and say who is going to be on the roster but I do know that playing against him in the Stanley Cup Final and watching their progression as a team, Carey was a big part of that. He has been the generational goalie in this league and I would say it’s been hard to find anyone who has been better the last 10 or 12 years.”

Regardless of how Cooper’s coaching career finishes, he can count on the fact all of Prince George is pulling in his direction.