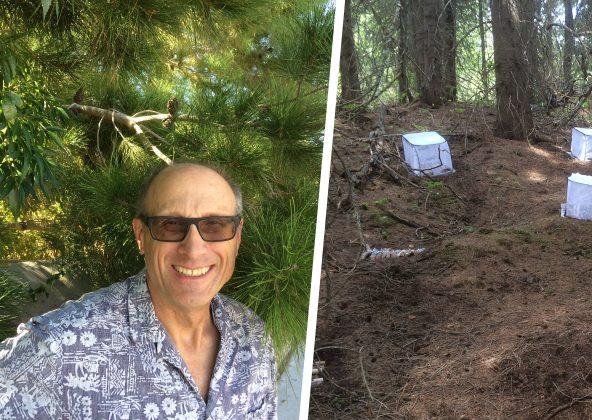 A new paper that was featured in the journal Nature looked into how deadwood decomposition contributes to carbon dioxide emissions.

An international team of researchers, including UNBC Ecosystem Science and Management Professor Dr. Phil Burton, placed 55 wood samples around the world, three in Northern BC, to determine the CO2 emissions from deadwood, and quantify the importance of bugs to the decomposition.

“In the tropics, a tree falls in the forest and it will lose half of its mass within a year or two. Whereas up here in the boreal, sub-boreal, and even the temperate forests the half-life of wood may extend to something like 20 years,” said Burton.

He said temperature and moisture play an essential role in how quickly a tree decomposes.

Burton said the majority of the study revolved around how bugs help with decomposition but said they found carpenter ants didn’t play as big of a role, as they prefer more open areas than what our forests provide.

However, he added that this study showed that we should be using deadwood as a resource whenever we can.

“The argument is often made while deadwood is a waste, whether it’s killed by fire or insects, or just sitting on the ground from natural incidental mortality. And so we should be hoovering up that deadwood and turning it into pellet fuels.”

The study is ongoing, and Burton said he’ll be looking at other factors that could be affecting the study, like how the amount of bark and amount of soil contact may have impacted decomposition rates.