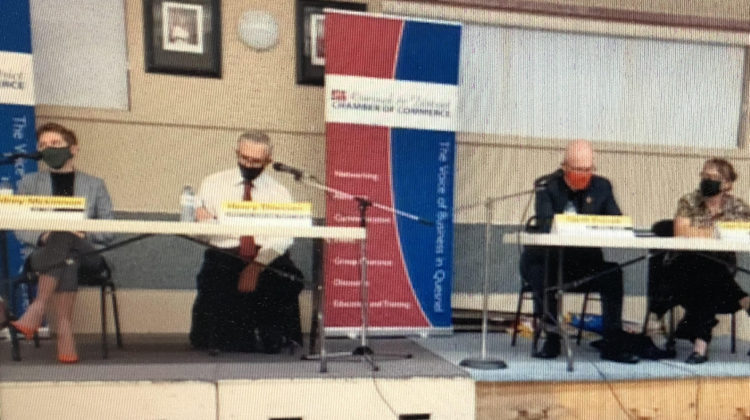 How to address the opioid crisis was front and center at an all-candidate forum at the Royal Canadian Legion in Quesnel last (Wednesday) night.

“By decriminalizing it, it helps to destigmatize it and brings people out of the shadows and allows them to seek the help that they need. We do need to ensure that people who are using drugs have access to a safe supply.”

Hunsinger-Chang, who is a doctor, added it needs to be looked at through a health lens and a health perspective and treat people with compassion just like we treat someone if they came to see me because of high blood pressure.

The NDP’s Audrey McKinnon was the only other candidate in favour of decriminalization.

“The drugs are toxic because they are criminal. We need to decriminalize the supply so that we can regulate it. That we can make sure that people are safe. All of the experts are advocating for decriminalization.”

McKinnon said then we can focus on mental illness and drug recovery programs.

Christian Heritage candidate Henry Thiessen said he was opposed to it, saying the black market is alive and well for marijuana now that it is legalized, adding he didn’t feel taxpayers should buy drugs for addicts.

Thiessen also said that he felt that the cause of the opioid crisis was primarily because of the feeling of hopelessness that addicts have.

He said that when you believe you were created by a loving creator and you have a destiny beyond this life, it makes a huge difference and it also leads to strong families.

People’s Party of Canada candidate Jeremy Gustafson raised some eyebrows on this topic,

“I’m opposed to mandatory vaccination but I would support mandatory drug rehabilitation, and that’s because if you’re huddled in an East Van alley, sucking on a crack pipe, sleeping there, rats crawling on you, you’re not able to take care of yourself anymore, and you need an intervention.”

Gustafson said a lot of these drugs were coming from organized crime, and that addressing the supply would also be a key to reducing the opioid crisis.

A few candidates, including Conservative candidate Todd Doherty, took exception to Gustafson’s description of an addict.

“To be clear they’re not just some addicts sucking on a crack pipe, they’re somebody’s father, brother, sister, mother, daughter.”

However, Doherty did agree though that we need to do everything in our power to stop drugs from coming into this country, arming our frontline officers and border services because he said right now they’re powerless.

He also said more resources were needed for frontline organizations in communities to ensure that recovery beds were available.

Liberal candidate Garth Frizzell said the Trudeau government was going to introduce a comprehensive strategy to address problematic substance use.

Other issues tackled at the forum included mental health, help for residents and businesses impacted by wildfires, and the COVID-19 epidemic.

– with files from George Henderson, My Cariboo Now staff