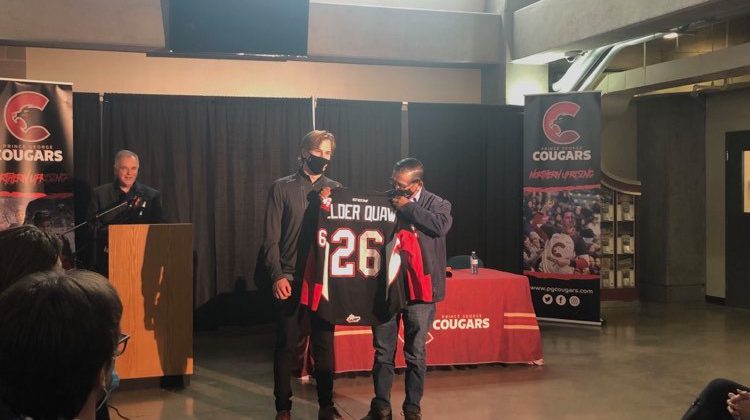 The Lheidli T’enneh First Nations and the Prince George Cougars have teamed up on several initiatives aimed at raising awareness of the long-term impacts of residential schools on Indigenous people and furthering reconciliation efforts within the community. 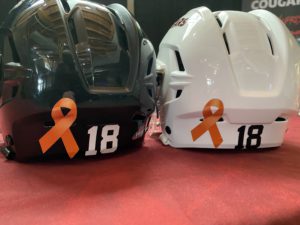 “Soon after they (The Cougars) learned of the discovery of the remains of the 215 children at the Kamloops residential school, The Cougars contacted us. They wanted guidance on the appropriate way to acknowledge the children and their families,” explained Lheidli T’enneh Chief, Dolleen Logan.

She said this lead to some meetings with team management, which is when they decided the players needed to learn more about the life of Indigenous students at residential schools so they could honour survivors appropriately.

As part of the initiatives, players were given a presentation from Lheidli T’enneh Elder and Lejac residential school survivor, Clifford Quaw about his experience in the system and the long-term impacts the system has had on him and his loved ones.

“Our players appreciated the opportunity to learn more about what it was like for students at the Lejac residential school from Elder Clifford Quaw,” said Andy Beesley, PG Cougars Vice President of Business.

Elder Quaw says he is hoping to offer a similar presentation next season and to even bring the team to the grounds of Lejac, which is located near Fraser Lake.

“I truly enjoyed doing the presentation for the Cougars, I see a lot of potential. The way it went is, truth and reconciliation, before you can do that you have to know the truth. Once you know the truth you can reconcile with everyone else,” Elder Quaw explained.

Additionally, a large memorial panel was placed inside the CN Centre. 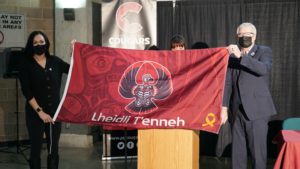 “We also thought a memorial panel inside the CN Centre was appropriate so that there is a visual reminder for the Cougars’ fans and patrons of other events,” added Chief Logan.

A new memorial Lheili T’enneh memorial flag was also presented by Mayor Lyn Hall, which will hang inside the CN Centre as well.

Additionally, starting at the home-opener tomorrow (Saturday) night, the Cougars will sport an orange ribbon decal on their helmets to honour the remains of the 215 children found at the Former residential school in Kamloops.

The orange ribbon will be worn by all players in the WHL, however, the idea came from right here in Prince George.

“The decal started in Prince George, it was the group leaders here. Andy (Beesley) said he was going to put it on his helmets on the Cougars team and then he told the WHL head office and the head office got back a few days later and said ‘no, we’re doing it right across the league’,” explained Chief Logan.

Chief Logan added the timing of today’s (Friday) announcement was important, as it followed immediately after the first-ever Day of Truth and Reconciliation in Canada.

During this announcement, it was also announced that Jonny Hooker will be the captain for the 2021-22 season.