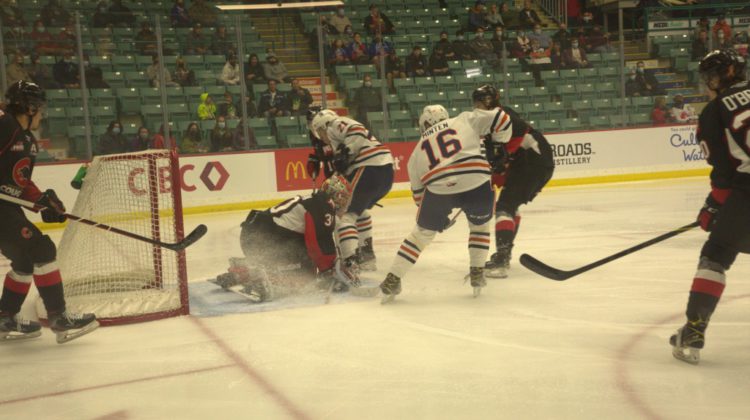 The Prince George Cougars returned to CN Centre for a WHL regular season game for the first time in nearly 19 months.

For the 2,425 fans in attendance, most left disappointed despite a valiant effort from the home team.

The Kamloops Blazers scored the first three goals and went on for a 5-4 victory over the Cougars.

Connor Levis snapped a 4-4 tie on the power-play with 4:51 left in the third period.

The goal came just 2:14 after the Cougars tied the game with a power-play goal from their Captain, Jonny Hooker.

Hudson Thornton led P.G. with a goal and two assists and was named the game’s first star.

Kyren Gronick, and Riley Heidt also tallied for the Cats, who were outshot 31-29.

📽️ HIGHLIGHT OF THE NIGHT 📽️

Tyler Brennan took the loss in net with 26 saves while Dylan Garand notched the victory with 25 stops.

Reese Belton and Marko Stacha gave the visitors a 2-0 lead after the first period.

Josh Pillar put Kamloops ahead 3-0 just 45-seconds into the middle frame before the Cougars scored three consecutive goals to tie the game after 40 minutes.

Fans can listen to all Cougars games on 94.3 The GOAT.

Despite the loss, it was an entertaining Home Opener on Saturday night. Check out the highlights from our battle with @blazerhockey.