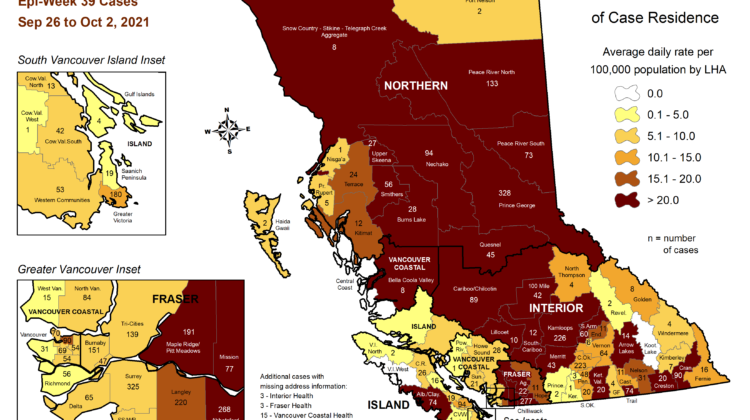 328 COVID-19 cases were identified in the Prince George Local Health Area (PGLHA) from September 26 to October 2, a number that spiked from the week prior when 280 cases were found.

The PGLHA is a vast area that also encompasses Mcbride, Valemount, and Mackenzie.

This is the most in the entire province, followed closely by the more populated Surrey area where 325 people were diagnosed.

According to the BCCDC, over 20 cases are being identified per every 100,000 people in most LHA’s in the North, including PG, Burns Lake, Smithers, and Nechako.

73% of PG residents 12+ are fully vaccinated, while 83% are partially immunized.

Nechako saw 94 cases during this time frame, an area that has 61% of the total eligible population fully immunized, the third-lowest mark in all of BC.

The Smithers area saw 56 cases, as 76% of eligible residents are partially vaccinated, and 66% are fully vaccinated.

66% of eligible Burns Lake residents are fully immunized, an area that saw 28 cases during this time frame.

The Peace River North and South regions have the lowest rates of immunization in the entire province, as 52% of eligible PR South residents are fully vaccinated, a mark that jumps to 54% in the North.