Rheaume rules the castle against Merritt 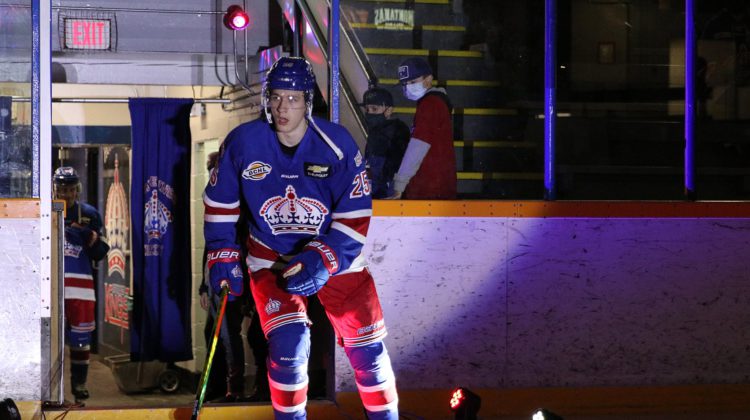 Nick Rheaume is a force to be reckoned with.

The 19-year-old power-forward from Sherbrooke, Quebec muscled his way to a three-point for the Prince George Spruce Kings in a 6-3 win over the Merritt Centennials on Friday in front of 713 fans at the Rolling Mix Concrete Arena.

“It was the first time a lot of the guys played in front of the home crowd and it was a great feeling. We are really happy to get the win in front of fans and we’ve missed that a lot.”

Rheaume’s first of two goals came at the 11:06 mark of the second period deflecting home a Simon LaBelle pass on a two-on-one, past Cents netminder Brayden Melnyk.

To cap off his stellar night, Rheaume blasted a pro-level shot from the far faceoff circle near the end of regulation, lighting the lamp once again.

The line of LaBelle, Rowan Miller and Rheaume combined for six points in the victory, improving PG’s mark to 2-1.

“I think we had a good season last year and we compliment each other very well. We all bring something different to the table and as you can see tonight, big credit goes to them for those amazing passes they gave me,” added Rheaume.

The Spruce Kings got off to a fast start in their home opener grabbing a 2-0 edge after the first period, outshooting Merritt by a 20-9 margin.

Austin Fraser broke the ice for the hosts, stepping up into the slot and ripping a wicked wrister past Melnyk sending the fans into a frenzy.

Eight minutes later, Miller re-directed a Dylan Schives point shot on the man advantage, catching Melnyk heading in the opposite direction and sliding into the open cage.

Merritt would finally solve the stingy defensive core of the Spruce Kings early in the second as a Talon Zakell blast beat netminder Aaron Trotter glove side to cut the deficit in half.

After Rheaume made it 3-1, Ty Gagno joined the goal parade deflecting an Amran Bhabra point shot past an outstretched Melnyk for a three-goal cushion after 40 minutes.

The only blemish on this night for the Spruce Kings would be the penalty allowing two consecutive power-play goals in the third period to Jerzy Orchard and Henry Smith.

Kolton Cousins also scored in the victory for the Spruce Kings.

Merritt went 3-for-7 on the power-play, while PG executed on two of three opportunities.

Thirteen Spruce Kings players had at least one point.

Both teams play again tonight at 7pm from the Rolling Mix Concrete Arena.