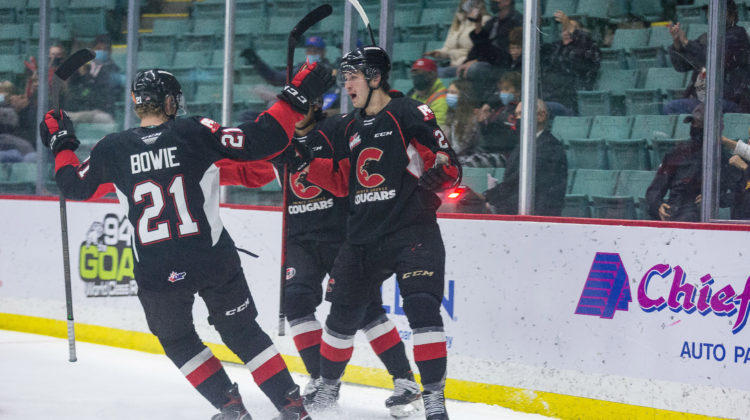 Even with a parade to the penalty box, nothing was going to detour the Prince George Cougars from completing a weekend sweep of the Victoria Royals.

The Cougars penalty kill was in fine form allowing just one power-play goal in ten opportunities enroute to a 4-2 victory on Sunday in front of 1,624 fans at CN Centre.

PG killed off its first of two double minors in the game after Connor Bowie clipped Royals forward Brayden Schuurman, which left behind a blood trail from the Victoria zone all the way to the visitors bench.

Blake Eastman put the Cats on the board first at 14:55 of the opening period, accepting a Liekit Reichle pass inside the Victoria blue line and ripping it past the blocker of netminder Connor Martin for a 1-0 lead after 20 minutes.

“That was just a pretty solid effort. I think my goal just set the momentum for the boys and brought them up early in the game. It’s a necessity and brings the energy to our team and really drains it from the other,” said Eastman.

However, any momentum that was built up quickly evaporated as the Cougars undisciplined play would come back to bite them.

A Bailey Peach point blast was deflected by Riley Gannon, handcuffing PG netminder Tyler Brennan, evening the scoring at one.

The Royals continued to pounce on a sleepy and youthful Cougars squad over the next several minutes, capping it off with a Trevor Scott blast that went underneath the crossbar, past Brennan making it a 2-1 lead for the visitors.

After a Jonny Hooker minor, the Cougars suddenly snatched the momentum and got their mojo back courtesy of Mitch Kohner’s first of the season, banking it off the pad of Martin and into the yawning cage.

In the third, PG erased another double-minor (Hooker) and took over for good.

After an initial shot from the corner from Kohner that deflected off the stick of Martin, Craig Armstrong pounced on the loose puck and wired it into the goal putting the Cats up 3-2.

The Airdrie, Alberta product put the icing on the cake, burying an empty-netter with the Victoria net empty in the dying seconds.

During the two-game set, Victoria went a combined 1-for-17 on the man advantage.

Eastman told MyPGNow.com post-game the penalty kill proved to be a staple even when it looked like they had gone to the well one too many times.

“It’s really important. We have a great group of guys here that are willing to block a shot, take a hit and do whatever it takes to kill off a penalty and win a hockey game. That’s what it took today and it takes a really close team to take pucks to the shins and the body.”

In addition, Armstrong’s three-point effort (two goals, one assist), puts him on just over a point-per-game pace and is the team’s second leading scorer, trailing only Riley Heidt (eight points) who went an impressive 14-for-20 in the faceoff circle against the Royals.

Armstrong mentioned his development took a few key strides over the abbreviated summer.

“I think I have improved a lot over the off-season and I have changed my game quite a bit since then. I have gotten in much better shape and that has allowed me to get off to a better start than even I had in the bubble.”

Brennan made 31 saves and collected his first win of the season.

Both teams continue their six-game mini series Friday and Saturday in the provincial capital.

Puck drop each night is at 7:05pm from the Save-On-Foods Memorial Arena.

The Royals and Cougars return to Prince George for another doubleheader on October 26th and 27th.

You can catch all the action on 94.3 the Goat with Fraser Rodgers.