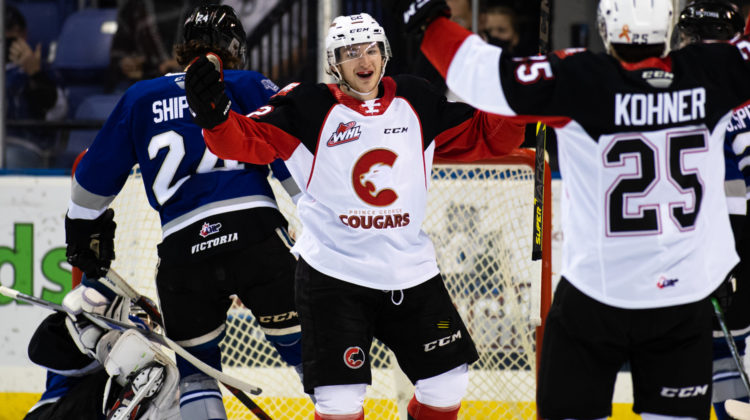 One period was all it took for the Prince George Cougars to beat the Victoria Royals for the third time in a week.

The Cougars exploded with five goals in the second (in an eight minute span) and then cruised to a 5-1 Friday night victory before 2,377 fans in the provincial capital.

Prince George is 3-3 on the season, including 3-0 against Victoria.

The Royals are at the bottom of the WHL standings at 1-7.

The Cougars spread their scoring around with 13 of their 18 skaters picking up at least one point.

Craig Armstrong, named the first star, notched a goal and an assist.

Ryker Singer, Jonny Hooker, Koehn Ziemmer, and Caden Brown also found the back of the net.

Brown and Singer both scored their first career WHL goals.

Hudson Thornton chipped in with a pair of assists.

Playing shorthanded did not seem to bother the Cats.

The Cougars penalty-kill went 5-for-5 and are 21-for-22 against the Royals this season.

The power play was a different story as P.G. went 0-for-2 and gave up a shorthanded goal to Keanu Derungs that gave Victoria a brief 1-0 lead early in the second.

Tyler Brennan picked up the victory with 19 saves as the Cougars outshot the Royals 42-20.

Brennan has stopped 50 of the last 53 shots he has faced.

The same teams play again tonight in Victoria (puck drop at 7:05 on 94.3 The GOAT) plus Tuesday and Wednesday in Prince George.

13 different point-getters power the @PGCougars to a victory.

Some finals for your Friday night! pic.twitter.com/sAQ8icjBN4