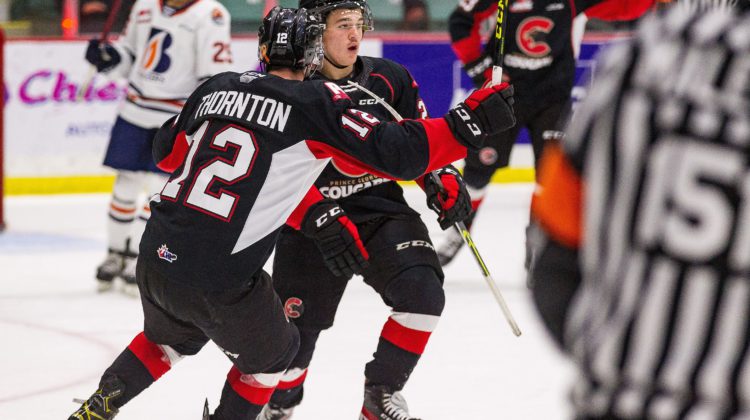 This is especially true when lining up against a powerhouse like the Kamloops Blazers.

The top-heavy Blazers skated the PG Cougars into submission on Saturday in front of 2,044 fans at CN Centre, earning a convincing 4-1 victory.

“We didn’t have our whole team going. We had one line going and we didn’t play a smart game at all,” said Mark Lamb, Cougars Head Coach and General Manager.

Matthew Seminoff proved to be the difference maker for Kamloops (8-1-0-0) with a goal and two assists to give the Blazers a six-point edge over the Cougars (5-4-0-0) atop the BC Division standings.

After fighting to a 1-1 draw after 20 minutes, the veteran-laden Blazers flexed their muscles in the second period, outshooting the Cats by a 20-8 margin.

Seminoff potted his fourth of the season at the 4:27 mark, capping off a three-way passing play on the man advantage, which included Viktor Persson and Nick McCarry.

The insurance marker came 13 minutes later off the blade of blueliner Ethan Brandwood who let a slap shot go from the Cougar blueline, fooling an unsuspecting Taylor Gauthier, giving Kamloops a 3-1 after 40 minutes.

“They outcompeted us, they played with the puck better than us and there are a lot of things that we didn’t do,” added Lamb.

“We had a lot of passengers. If you don’t come and play the right way, that is what is going to happen to you.”

To cap it all off, Seminoff collected another assist in the third period, firing a pass on a 2-on-1, which found the tape of streaking forward Reese Belton.

Connor Levis also added a single for Kamloops, while PG rookie Riley Heidt replied in a losing cause, snapping a five-game winning streak.

He got some Heidt on that backhand 😎@PGCougars pic.twitter.com/xHlpgSLdK1

Gauthier made 45 saves in defeat for the Cougars who were outshot 49-28 overall. His counterpart and former Team Canada teammate Dylan Garrand made 27 saves in the victory.

“All the games up until now have been really close. The home opener, we should have won against them (Kamloops). It is a matter of inches, we got to stick to basics and do what we do best. We have a big, fast, physical team that has a lot of skill.”

The Cougars drop to 0-3 when trailing after two periods.

On the flip side, Kamloops is 7-0 when leading after 40 minutes.

You can hear both games on 94.3 the Goat with Fraser Rodgers doing the play-by-play.