Strong effort from Tyler Brennan but Cougars lose to the Giants 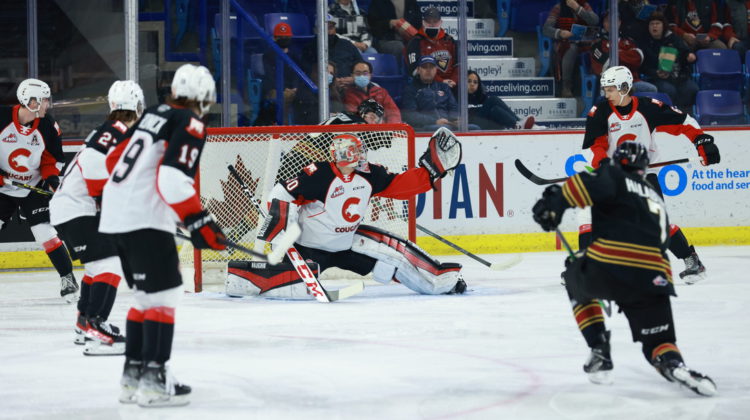 The Prince George Cougars are 5-and-5 after 10 games but they have yet to win against a team other than the Victoria Royals.

Friday night at the Langley Events Centre before 2,682 fans, the Vancouver Giants beat the Cougars 3-1.

After rookie and the Cougars leading scorer Riley Heidt gave Prince George a 1-0 lead after the opening period, the Giants roared back with a couple of goals in the second and one late in the third into an empty net.

“It certainly was a hard-fought game. When you break it down, I thought we had a good first period. A tough bounce went against us in the second on one of their goals. They then had a push in the third, but we responded and were right there with them. We had a lot of guys going tonight. Disappointed we didn’t come away with a point.” said Cougars’ Associate Coach Josh Dixon.

Tyler Brennan was sharp in the Cougars net with 32 saves as Vancouver outshot P.G. 35-26.

Prince George is 5-0 against Victoria and 0-3 against Kamloops and 0-2 vs. Vancouver this season.