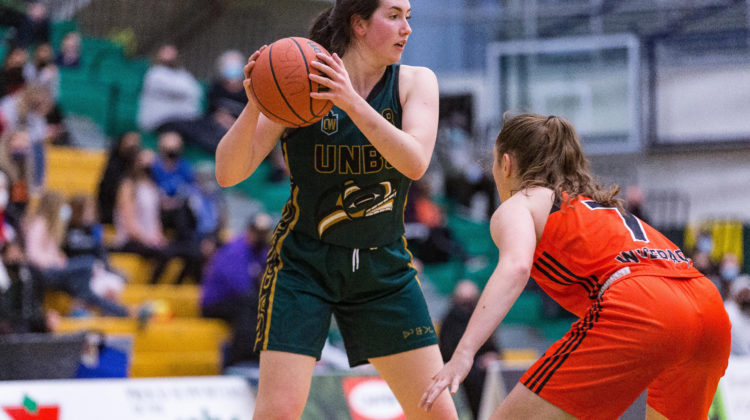 The Thompson Rivers Wolfpack are pretty glad to put the UNBC Timberwolves out of their sights.

A 47-12 run in the second half, propelled the T-Wolves women’s basketball team to an 88-46 thrashing against the Wolfpack from the Northern Sports Centre on Saturday.

The trio of Rebecca Landry, Laura Garmendia-Garcia and Alina Shakirova came out the gate hot for UNBC combining for 31 points in the first half, which saw the hosts lead by a 37-22 margin.

Early in the third quarter, the game appeared close as TRU came within seven points but a timeout by T-Wolves head coach Sergey Shchepotkin must have included the Midas touch as the hosts didn’t look back after that.

“He was just telling us to work together, and trust each other,” said Anastasia Soltes.

Anastasia Soltes lands her third 3-pointer at the start of the fourth quarter! pic.twitter.com/22BEshMAgf

From there, a Sveta Boykova jumper, a Lucy Guan steal and bucket, and then back-to-back threes from Sarah Kuklisin and Soltes helped cement the sweep for the Timberwolves.

When the final buzzer sounded, the Timberwolves improved to 3-1 and pulled into a first place tie with the Fraser Valley Cascades.

Shakirova led the way offensively with 21 points and eight rebounds, but she had plenty of help.

“If we keep the same energy, we will be just fine. People look at us as the underdog, every single year. But, we always put up a fight,” said Soltes, postgame.

“If we continue to be that aggressive, well-gelled team, we will be just fine.”

On Friday, UNBC coasted to a 68-51 victory against TRU.

Shakirova was 8-for-14 on field goals while Boykova gobbled up 15 rebounds.

Danielja Kovacevic had a game-high 14 points for the Wolfpack.

Thompson Rivers was a chilly 18-for-63 on field goals, including a 3-for-21 showing from beyond the arch.

In men’s action, the Timberwolves earned a home split against the Wolfpack claiming a 69-57 win.

His sidekick, Vova Pluzhnikov, also chipped in with 15 points of his own.

“Our leaders stepped up. Our fifth-year guards, Tyrell, Vova, and Payton. They had fantastic games,” said Chris Ross, Timberwolves forward.

“That was huge for us. They led us on the offensive end and then, as a team, we took care of it defensively. A ton of rebounding, making them make tough spots. It is fantastic to walk out with a win.”

In addition, Ross and Payton Tirrell turned in a pair of gritty performances at both ends of the court with 16 and 13 rebounds each.

Nice save by Daniel Kopf in the fourth quarter for Chris ross to lay one up for @UNBCBasketball ! pic.twitter.com/ET1v2mF5Ys

The T-Wolves were up by as much as 21 points and held the lead for over 39 minutes.

UNBC went 9-for-24 from beyond the arch.

Brad King and Brendan Sullivan each had 14 points each for TRU.

On Friday, the Wolfpack upended the Timberwolves 68-57.

Simon Crossfield was the high scorer for Thompson Rivers with 17 points including a 5-for-7 performance from 3-point range.

“You have to trust your teammates and the work we have put in, be solid on defense and believe if we get another good look, we will hit it.”

Laing led UNBC in defeat with 21 points who were without Fareed Shittu who is currently serving a three-game suspension.

UNBC is now 2-2, good enough for 5th in the West Division.

Both varsity teams are off for two weeks before hosting the UBC Thunderbirds November 26th and 27th from the Northern Sports Centre.