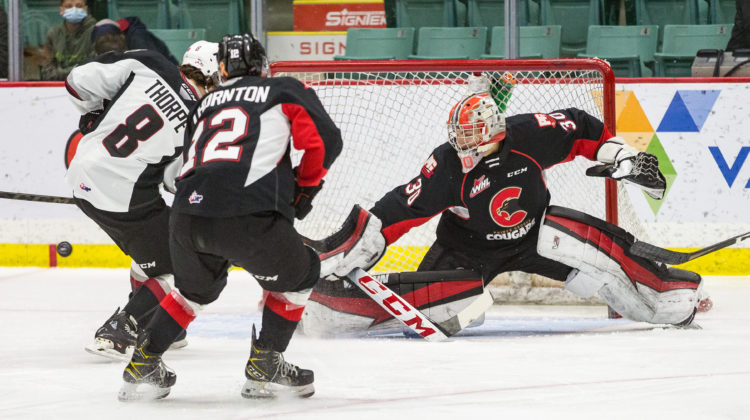 The Prince George snapped more than a three-game losing streak against one of their biggest rivals.

Connor Bowie’s breakaway goal at 3:28 of the second period on the power-play was enough for the Cats to claw out a chippy 1-0 victory against the Vancouver Giants in front of 1,453 at the CN Centre Tuesday night.

This also marked the first time in seven opportunities the Cougars (6-6-0-0) defeated a team not named the Victoria Royals.

“It feels good. It kind of shows we are putting in lots of work and we want to get on a streak during this homestand and go from there,” said Bowie.

“After the three losses in a row it was hard for us to stay positive and not get negative in the room but Lamber (Mark Lamb) does a good job in the room to keep us positive and we pulled through tonight.”

Connor Bowie gets the home side started up North!@PGCougars pic.twitter.com/zS3hYkIP3H

The 20-year-old from Fort St. John was one assist shy of a Gordie Howe hat-trick after participating in a spirited tilt against Vancouver blueliner Damien Palmieri.

Bowie jokingly admitted he wanted on the ice real bad when the Giants pulled goaltender Will Gurski late in the third period.

“I was kind of itching at it a little bit but at the end of the day, I am happy to get the win.”

The contest turned it to a goalie’s duel early on as Gurski (Vancouver) stopped 23 of 24 Cougar shots, while Tyler Brennan slammed the door for PG turning aside all 27 pucks he faced, collecting his second shut out of the season.

Since October 17th, Brennan has been red-hot in his last five starts stopping 140 out of his last 145 shots with a sparkling save percentage of .965.

Brennan admitted the presence of veteran netminder Taylor Gauthier pushes him to be better on the ice every day.

“I think it’s good because in practice we are trying to be the better goalie and we are fighting for starts so I think it’s a good push for me.”

With the win, the Cougars find themselves just one point back of Vancouver for 2nd place in the BC Division, however, the Giants have two games in hand.

The Giants were without key forwards Justin Sourdif and Zack Ostapchuk due to injuries sustained at a recent practice.