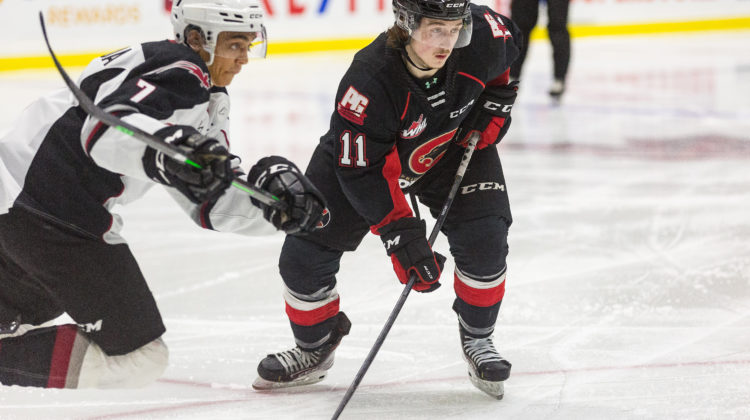 Sometimes youthful exuberance does have a downside.

In the case of 17-year-old defenseman Jaren Brinson, it cost the PG Cougars two points.

Adam Hall lit the lamp twice on Brinson’s second period five-minute fighting major to give the Vancouver Giants (7-3-1-1) a 5-3 win on Wednesday in front of 1,709 fans at CN Centre.

“It was that and a lot of other disciplined plays and we were in the penalty box way too much and we didn’t get any calls,” said Mark Lamb, Cougars Head Coach and GM.

“He (Brinson) knows what he did and the guy he fought by himself is a feisty player that will usually answer that bell. It’s a learning experience and you get sucked in once in a while.”

The Cougars (6-7-0-0) were on their heels to start the game as they dug themselves an early 2-0 hole as Ty Halaburda and Alex Cotton solved netminder Tyler Brennan in a span of 90 seconds to put Vancouver in the early driver’s seat.

In addition, the return of Florida Panthers prospect Justin Sourdif also proved key as the silky-smooth forward tallied three assists for the G-men.

“That’s hockey but I thought we also had a few really good chances in the first period. We overpassed, we had some really good looks and didn’t capitalize on them. That is a learning experience when you get a chance right in the slot you got to get it into the net and create second chances,” added Lamb.

Craig Armstrong took a slick feed from Caden Brown to put the Cougars on the board prior to the intermission, making it a 2-1 contest.

To begin the middle period, Connor Horning (Vancouver) and Brown traded goals for both sides keeping it a one-goal spread prior to the Brinson major-penalty.

Lockwood, Saskatchewan product Bauer Dumanski notched his first career WHL goal before the conclusion of 40 minutes as his point shot got through Vancouver netminder and Vegas Golden Knights prospect Jesper Vikman, making it a 5-3 game.

However, Vikman is off to a fast start in his WHL career going 6-1-1 with a 2.74 goals against average to go along with a .908 save percentage.

The Giants went 3-for-5 on the power-play while the Cougars were 0-for-2.

Vancouver outshot PG 38-30 overall and are three points up on them for second place in the BC Division with two games in hand.

Cougars forward Kyren Gronick left the game and didn’t return after getting rocked inside the Giants blueline.

PG continues its six-game home stand with a pair of dates Friday and Saturday against the Kelowna Rockets.

Puck drop for both games is 7pm from CN Centre.