Rockets blast off early against the Cougars 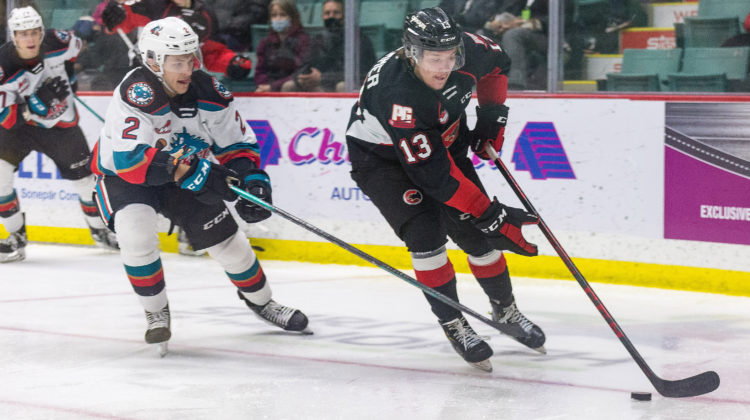 The Prince George Cougars “compete level” was missing early and it cost them in a 5-2 loss to the Kelowna Rockets.

The Rockets scored the first three goals of the game by the 15:02 mark of the first period before 1,829 fans Friday night at CN Centre.

The European connection took care of the Cougars scoring.

Liekit Reichle of Switzerland (the game’s second star) notched a goal and added an assist on a tally from defenceman Viliam Kmec, who is from Slovakia.

Kmec’s goal was the first in his WHL career.

Taylor Gauthier was tagged with the loss in net after he surrendered four goals on 30 shots.

Good start to the weekend for the @Kelowna_Rockets.

The Cougars were again stung by the injury bug as defenceman Bauer Dumanski and forward Caden Brown did not finish the game.

Forward Kyren Gronick did not play after being hurt in Wednesday’s 5-3 loss to Vancouver.

Defenceman Aidan Brook, acquired this week from the Medicine Hat Tigers for a 6th round draft pick, made his Cougars debut and was a plus one.

The Cougars are 1-2 on a six-game homestand which continues tonight against the Rockets.

We have signed 2004-born forward Gavin Schmidt to a WHL Standard Player Agreement. He will make his debut tonight against the @Kelowna_Rockets.#NorthernUprising | #WHL