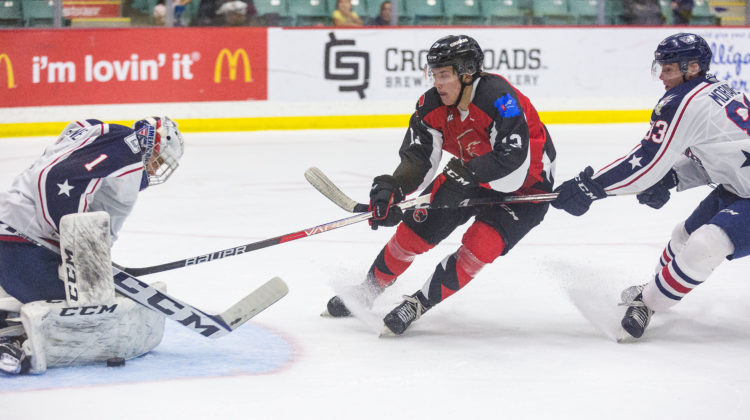 All it took was a familiar face to dig the Prince George Cougars out of a rut.

A sterling performance by 20-year-old netminder Taylor Gauthier backstopped the Cats to a 4-2 victory against the Tri-City Americans on Saturday in front of 2,019 fans at CN Centre.

“I thought the guys did a good job of getting the pucks away when I was letting out rebounds but at the same time I was doing a good job at containing them, putting pucks in good places, stopping the ones I needed to,” said Gauthier.

For the first time in a while, the Cougars started the game on time and actually drew first blood courtesy of Craig Armstrong who took advantage of a Riley Heidt feed and ripped it past Americans import netminder Tomas Suchanek for a 1-0 lead.

“It’s been a wart in our game recently with these slow starts and I think we wanted to focus on those quick starts and not fall behind. It’s a lot more fun playing with a lead then chasing the game every night,” added Gauthier.

O’Brien collected the decision from the judges after a late blow connected underneath the nose of Andreeg before scoring the three-point takedown.

However, the Cougars would end the period on a sour note after Jonny Hooker was drilled from behind and into the Tri-City net by Mitchell Brown.

Hooker left the game and did not return.

After a scoreless second period, which saw numerous saves from both goalies, PG finally put some much-needed distance between themselves and the Americans.

Suchanek played the puck in front of the Tri-City crease like it was a grenade and was stripped of it last moment by Koehn Ziemmer, who’s thievery gave the Cougars a 2-0 lead.

His fourth of the season ended a five-game scoring drought for the 17-year-old from Mayerthorpe, Alberta.

“Obviously, the last few games I have not played my game and I finally got rewarded for it. It feels good to get the monkey off the back,” mentioned Ziemmer.

Following an Ethan Ernst goal that made it 2-1, PG finally delivered the knockout blow.

Before the off-ice officials could jot down the scoring play, O’Brien drove wide on a Tri-City defender, which led to a juicy rebound goal from overage forward Connor Bowie to extend the lead to 4-1.

A sharp angle shot by Americans forward Jake Sloan made the score a little more respectable but did not put a dent into the Cougars plans.

PG kicks off a six-game road swing on Saturday (November 27th) against the Kelowna Rockets.

“We get to go to the States for the first time in two years so I think everyone is really excited about that and the young guys are super excited as am I,” said Gauthier.