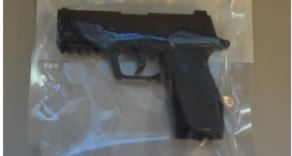 It only took five minutes for the Prince George RCMP to take a suspect into custody following a shooting at a local business.

Just before 10am this morning (Thursday), the detachment received a report of a man with a handgun at Parkwood Shopping Centre.

According to witnesses, the man had shot at the window of one of the businesses.

Officers as well as the Downtown Safety Unit flooded the area and located the suspect walking away from the shopping centre.

Police recognized the man from previous encounters and took him into custody.

Investigators located a pellet gun hidden on him. The suspect, who is well known to police for similar incidents, will remain in custody.

Police are forwarding charges to the B.C. Prosecution Service.

“Only five minutes elapsed from the time police received the initial call to the time a suspect was arrested. This is another excellent example of cohesive work by both Frontline police and Downtown Safety Unit members who are committed to holding those responsible for violent crime accountable and ensuring the safety of our community,” said Cpl. Jennifer Cooper.