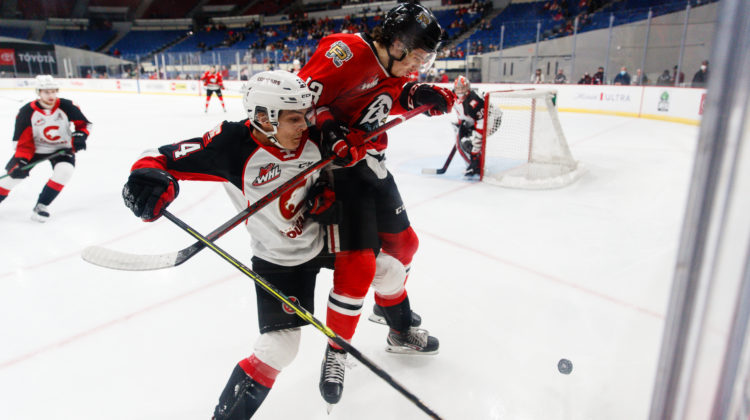 The Portland Winterhawks averaged a shot practically every minute and they averaged a goal every 10 minutes.

The Winterhawks scored four unanswered goals in the third period to dump the Prince George Cougars 6-2 Wednesday night before 1,544 fans in Portland.

The game was tied 2-2 after both the first and second periods.

Tyler Brennan was arguably the best Cougar making 53 saves as Portland outshot Prince George 59-15, including 15-3 in the second and 21-3 in the third.

📽️ HIGHLIGHT OF THE NIGHT 📽️

Prince George actually jumped out to a 2-0 lead as Liekit Reichle and Kyren Gronick tallied in the first nine minutes before the roof caved in for the visitors.

“We came out with jump, built a good lead but then we just sat back and let them back into the game,” said Cougars’ Associate Coach Josh Dixon. “Our puck management hurt us, as that led to offense and momentum for them (Portland). We turned the puck over too much in the neutral zone.”

It was the second loss in the U.S. in as many nights for the Cougars, who fell 3-1 to the Seattle Thunderbirds on Tuesday.

The (7-13) Cougars have lost seven of their last eight and are 0-3 on a stretch of six straight games on the road.

The Cougars are 4th in the B.C. Division, eight points behind Kelowna and nine behind second-place Vancouver.

This is just the beginning of December folks #FinalScores pic.twitter.com/THs10cp6kb