Four suspects wanted by police after pair of armed robberies 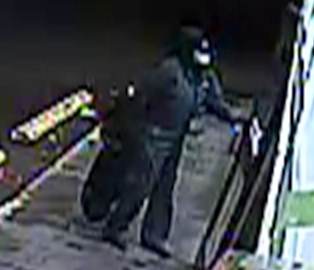 The Prince George RCMP is investigating a pair of armed robberies from the past week.

On Saturday (November 27th), officers received a report of an armed robbery to a business on the 1700 block of Queensway.

The victim told police a female in a green snowsuit entered the business holding a partially concealed firearm and demanded money. The detachment and the Police Dog Service team conducted patrols for a woman matching that description but were unable to locate anyone. The suspect left with an undisclosed amount of money.

The female is described as:

A second robbery took place just after 5 pm on Tuesday (November 30th). Police attended a business on the 1600 block of 15th Avenue after receiving a report of a robbery with a firearm. The victim told police three individuals entered the store with a firearm and took a variety of electronic items and money from the till. The approximate value of the loss is $20,000.

The suspects are described as:

“These robberies bring an unacceptable level of violence to our community. We believe there are people out there who have information on the suspects in these incidents and are appealing to anyone with information to come forward to police with what they know by calling the non-emergency line at 250-561-3300 and quoting file numbers 2021-46710 and 2021-46930, stated Cpl. Jennifer Cooper, Media Relations Officer.