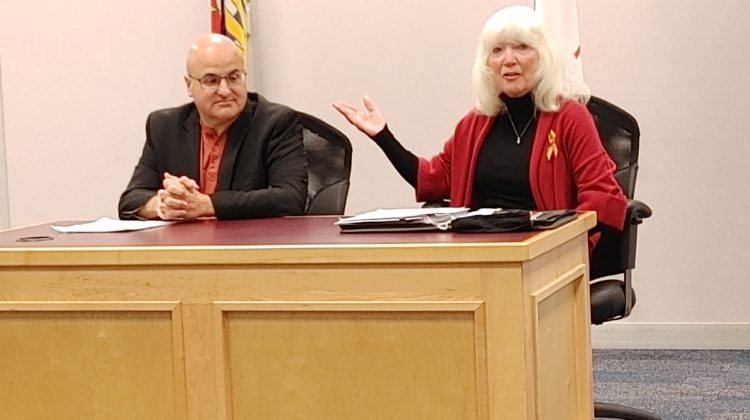 School District 57 Board Chair Sharell Warrington has some concerns over one of the potential candidates vying for a trustee spot in next month’s by-election.

However, Warrington told MyPGNow.com Parker hasn’t officially filed his paperwork but admits there could be
public backlash from education stakeholders and parents if any candidate forums occur that involve him.

“Yes, this is out in the media now and we expect there will be many questions,” said Warrington.

“He hasn’t filed his papers and we are confident the voters will support the best candidate for the board and our code of ethics will guide all current and new trustees.”

When asked if Parker’s candidacy could be a public relations nightmare for SD 57, Warrington stated: “Yes it will be and we will handle it.”

In addition, a rally was held Thursday afternoon in response to Parker’s candidacy.

The by-election will be held on January 15th – this is due to the sudden departures of former Board Chair Trent Derrick as well as Vice-Chair Shuirose Valimohamed who each tendered their resignations in September.

The decision for Derrick and Valimohamed to resign came about a month after the Ministry of Education urged the Prince George School Board to act on a special advisers report, which outlines concerns in the school district, including educational outcomes for Indigenous students, relationships with First Nations communities, allocation of resources, and strategic planning.

Warrington added the board is working tirelessly to undo a lot of the previous mistakes made within SD 57.

“School District 57, our senior team and trustees have been doing a lot of hard work. We are ensuring that we will be open, transparent, and committed to reflecting the values of our community,”

“That is our commitment.”

Former Prince George School District superintendent Rod Allen  joined McGregor and Wilson as a special advisory team to work with the board to:

The special advisers are then to submit a final report to outline the progress made by the board in meeting the government’s expectations by March of next year.

The Prince George Board of Education is required to report every two months on its progress. The board’s reporting must include:

A link to the full report can be found here.