Hutchings leaving it all on the ice for Northern Capitals 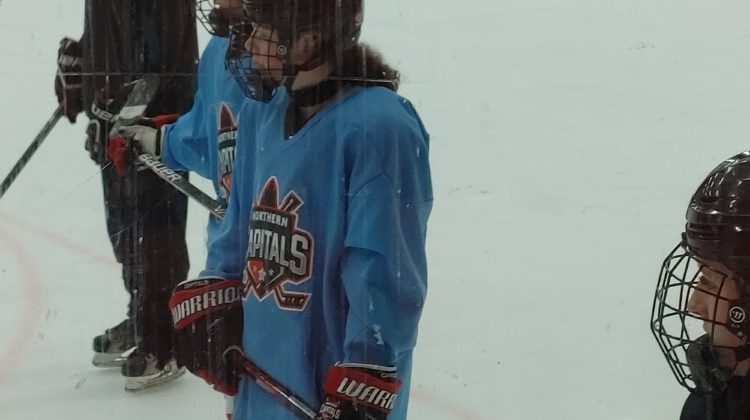 Brooklyn Hutchings is playing her best at every turn for the Northern Capitals.

The 17-year-old from Prince George has been a force to be reckoned with in the BC Elite Hockey League’s Under-18 Female AAA division posting 15 goals and 15 assists – good enough for top spot in the scoring race.

The Caps are in first place in the five-team league with a record of 14-5-0-3, one point up on the Fraser Valley Rush.

In an interview with MyPGNow.com, Hutchings stated it’s been a long wait back to the top after the 2020-21 campaign was slashed due to the pandemic.

“It’s been good to battle hard against my teammates in practice trying to work up that intensity because not playing games for a year was tough. Now, to be able to jump back into games and do very well is great to see.” 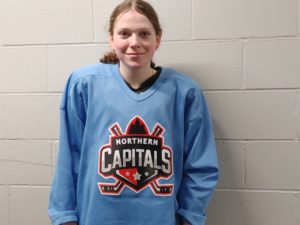 Hutchings is one-third of the league’s best forward line that includes Hailey Armstrong and Maria Ayre who both have 28 and 24 points respectively.

“I’ve coached her since she was a first-year bantam and she has come a long way. Brooklyn’s always had good skill and great hands but I think the biggest opportunity for her game was to get some size and strength and she has done that. She worked really hard away from the rink to build up her strength and it’s paying off for her on the ice.”

Aside from leading the league in goals, the on-ice accolades continue to roll in for Hutchings who recently committed to Trinity Western University.

“It’s a great fit for me. It was a school I really wanted to go to and their program is really good and I like the smaller community being a small-town kid myself. I’m really looking forward to playing there.”

Hutchings was one of three Caps players including Armstrong and Calgary Dinos commit Keagan Goulet who captured a gold medal for Team BC at last month’s Western Regional U-18 Championships in Portage la Prairie, Manitoba.

“I’ve played with both of them for three years now and both of them are my best friends and it’s great just to win the gold medal. Hailey scoring the game-winning goal was unbelievable, it was indescribable.”

Desjardins also believes since all three returned with a gold medal around their necks, that championship effort is starting to rub off on the rest of the players.

“After winning a championship like that and bringing back stories and what it meant to them, it makes those girls think about putting in the same kind of work so they can get the same level of opportunity.”

The Capitals are set to depart for the Mandi Schwartz Memorial Tournament in Wilcox, Saskatchewan, which begins on Thursday.

Desjardins believes this will be a good measuring stick for Hutchings and company to find out where the Caps fit among the rest of the elite teams in Western Canada.

“We are really looking forward to that showcase as there are going to be a lot of scouts and some tough teams that we are up against. But, when you go to a tournament like this we might as well play against the better teams, showcase our players and show we can compete at that level.”

The Capitals are in Pool B which also includes the host Notre Dame Hounds, Rink Academy of Winnipeg, and the Red Deer Sutter Fund Chiefs.

The full schedule can be found here.