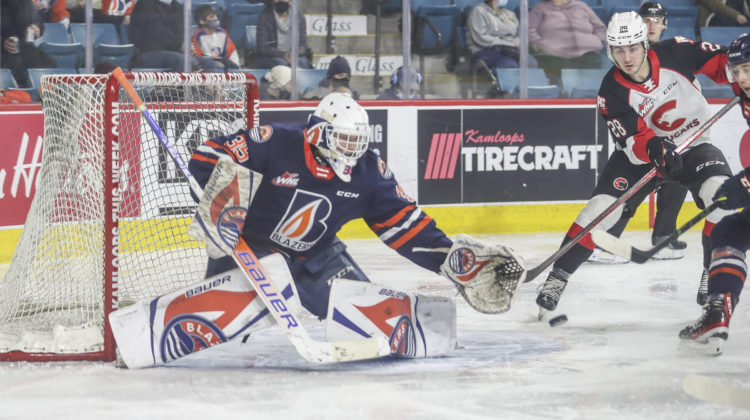 In a stretch of just eight days, the Prince George Cougars have put together a five-game win streak.

On Friday night before 3,170 fans at the Sandman Centre in Kamloops, the Cougars beat the B.C. Division leading Blazers 5-2.

The box score is right here.

Allow us to bless your timeline with a Goat sighting 🐐@PGCougars pic.twitter.com/MXSqFe3hKh

Gauthier is 4-0-0-0 in his last five appearances with a 2.34 goals-against average and .944 save percentage

Craig Armstrong (the game’s first star) snapped a 2-2 tie at 6:43 of the third, with his team-leading 10th goal, and the Cats put the game away with a couple of empty net goals.

Armstrong, Riley Heidt and Blake Eastman all finished with a goal and an assist while Ryker Singer and Ethan Samson also tallied for the Cougars, who never trailed.

Kamloops went 1/3 on the power-play and Prince George 0/4.

“I really think this is our biggest win of the season thus far. It wasn’t a game where we held on or got lucky with a few bounces. I believe we were full value for the win and really looked like a team getting the job done. Biggest team effort of the year,” said Cougars’ Associate Coach Josh Dixon.

“There were times through this streak where we weren’t sharp but tonight didn’t feel like that. Tonight, was a smart, simple, structured road game. As complete of win certainly on the road, and as complete of win as we have had all year,” added Dixon.

Still trying to find our “A” game.
Prince George takes this one 5-2 with two late empty-net goals.
Thanks #BlazerNation🔥 see you after Christmas! 🎄
📸 @ADouglasPhotos pic.twitter.com/qdEBb0ELt8

The (13-14) Cougars visit the (13-12-1) Vancouver Giants tonight in Langley in their final game prior to the Christmas break.

Prince George is 4th in the B.C. Division but just a point behind both Vancouver and the (12-9-0-3) Kelowna Rockets.

The Canadian Hockey League has announced that 10 games from the 2021-22 regular-season schedule will be televised by TSN. The broadcast schedule includes the PG Cougars at the Vancouver Giants on Friday, Jan 14th at 7 PM.