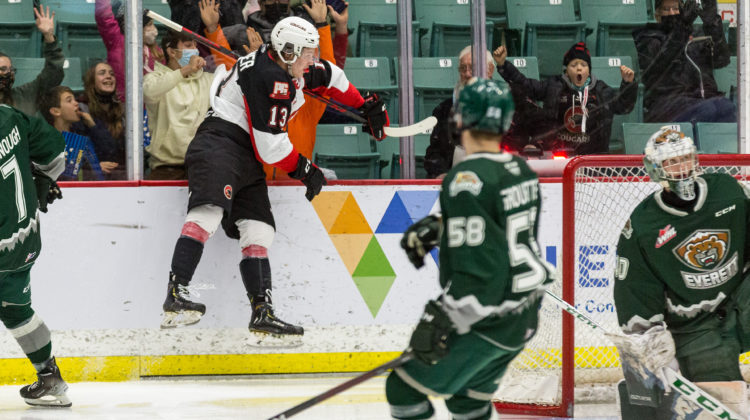 Despite having 51 goals and 181 points out of the lineup, the Everett Silvertips showed why they are the class of the US Division.

Alex Swetlikoff’s 16th of the season 2:15 into overtime proved to be the difference maker in a wacky 6-5 road victory on Tuesday against the Prince George Cougars in front of 2,052 fans at CN Centre.

“It was sloppy. It was sloppy at both ends of the ice. We made some good plays offensively but we have a lot of stuff we have to clean up for tomorrow and we will. It’s not surprising at all to have a game like this after Christmas with all the time off you lose your feel for the puck and the play,” said Mark Lamb, Cougars Head Coach and General Manager.

Need an OT winner? No Swet, he got dis.@WHLsilvertips pic.twitter.com/8sYdUGUxsB

It only took 2:07 for the offensive floodgates to open as Tampa Bay Lightning prospect Niko Huuhtanen turned and fired a loose puck past a screened Ty Young giving the Silvertips a 1-0 edge.

Eastman parked himself in front of the Silvertips net and tucking home the loose puck past an outstretched Braden Holt following a point shot from rookie blueliner Bauer Dumanski.

Before the intermission, Swetlikoff evened the score on the power-play shortly after Cougars forward Craig Armstrong was called for tripping.

Everett discovered the fountain of youth in the second period as it would be their fourth-line to light the lamp twice.

The goal was Grouette’s first in the WHL who hails from Dauphin, Manitoba.

Eight minutes later, it would be Woodward’s turn to pot his first of the season, capitalizing on a three-way scoring play courtesy of Austin Roest and Dylan Anderson.

PG dug their heels in and cut the deficit back down to one at the tail end of a too many men on the ice call.

Jaren Brinson’s point blast fooled Holt and went underneath the blocker side making it a 4-3 Everett edge after 40 minutes.

It only took 70 seconds for Koehn Ziemmer to put the Cats back on even terms, as his rush down the left wing was too much for Holt to counter, notching his 8th of the campaign.

Riley Heidt then put PG in front for the first time in the game, rifling a wrist shot for a 5-4 lead.

However, much like the first half of the season, the lead would be fleeting for the youthful Cougars as Huutahnen beat Young for the second time 40 seconds later.

Both teams went a combined 2-for-7 on the power-play.

The Silvertips extended its edge to eight points atop the Western Conference over the Kamloops Blazers and Seattle Thunderbirds despite missing its top two defenceman Ronan Seeley and Olen Zellweger along with high-scoring forwards Ben Hemmerling, Jackson Berezowski, Hunter Campbell and Michal Gut.

It’s been a busy couple of days on the trade front for the Cougars.

Today, Lamb pulled the trigger on a massive three-way deal that also involved the Saskatoon Blades and the Medicine Hat Tigers.

In exchange, forward Kyren Gronick was dealt to the Blades along with defenceman Ryan Nolan (via Medicine Hat) and a 4th Round Pick (from Medicine Hat).

The Tigers received a 5th rounder in 2023 from the Cougars along with 19-year-old forward Brendan Lee and 17-year-old defenceman Pavel Bocharov (both from Saskatoon).

“It came about over the break. He (Gronick) wanted to be closer to home and it was a situation we wanted to take advantage of. We got a couple of young impact forwards in this deal and we also got an import defenceman from the Gauthier trade and we think we got some good return on them.”

Gauthier played in 166 career regular season games over five seasons with the Cougars. He leaves as third all-time in games played by a goaltender in franchise history.