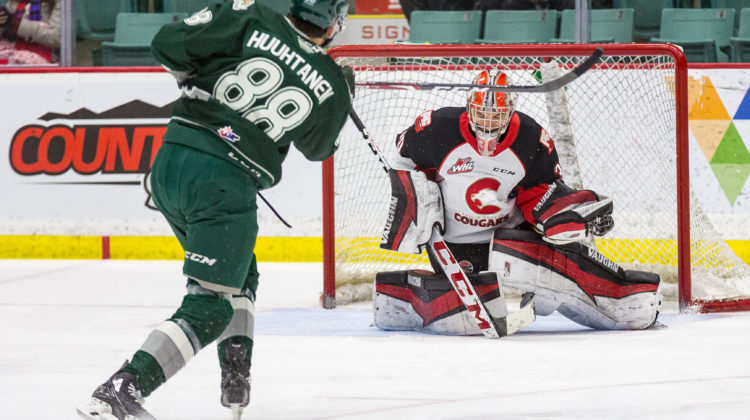 A 60-minute effort continues to be a work in progress for the Prince George Cougars.

Similar to a broken record, the second period was the Achilles heel.

The dynamic duo of Ryan Hofer and Niko Huutahnen led a four-goal surge for the Everett Silvertips enroute to a 4-2 victory in front 1,641 fans at the CN Centre on Wednesday.

“I’ve been rolling with that line there as both of us have been playing for a while so it’s nice when things click like this and we have to keep it going,” said Hofer.

After a scoreless first period that saw both teams muster 11 shots each, the wheels came off for PG just seventeen seconds into the middle period.

Hofer roofed his first of two past Cougars netminder Tyler Brennan, connecting on a Huuhtanen pass to draw first blood.

A parade to the penalty box soon followed, which proved costly against a potent Silvertips power-play.

Huuhtanen sent a one-timer into orbit giving Everett a 2-0 lead.

You know when a jet flies over head and you can see the trail behind it?

The turning point in the game came halfway through period as Silvertips netminder Koen MacInnes performed larceny on newly-acquired forward Carlin Dezainde whose one-time shot was snatched out of the air on a 3-on-1 rush.

“That was crazy. I think they had a 2-on-1 and then they had a third guy busting his hump up the ice and we thought it was going to be a pass over as the defenceman came over and was out of the play. I thought he was going to shoot it and then at the last second he turned it over to the third guy and all you can do is battle, there is no technical aspect when that happens.”

Before the intermission, Hofer and Alex Swetlikoff lit the lamp twice more on the man advantage, stretching the Everett edge to 4-zip.

Bauer Dumanski and Koehn Ziemmer led a mini-comeback for the Cougars, lighting the lamp once each.

The Silvertips went 3-for-4 on the power-play while PG was 1-for-2.

Hofer had a game-high ten shots on net for the US Division and Western Conference leaders who improved to 23-6-2-1 despite missing star blueliners Ronan Seely and Olen Zellweger along with high-scoring forwards Ben Hemmerling, Jackson Berezowski, Hunter Campbell and Michal Gut.

“I think everybody will tell you it is hard work. Every guy in there works as hard as they can and it’s something I have never seen before in my career and it’s really incredible how they work and compete every shift,” added MacInnes.

This was Everett’s first trip to Prince George since January of 2020. Hofer noted it is nice to start the second half of the season on the road and in Canada after playing a predominant divisional schedule.

“It’s super nice coming across the border. I definitely missed the Tim Hortons for sure so it’s nice coming up once in a while,” chuckled Hofer.

“I thought we were a step behind the entire game. We got outworked the whole night,” commented Cougars’ head coach and general manager Mark Lamb. “Our compete level wasn’t where it needed to be.”

The game also marked the Cougars debut for DeZainde and Cayden Glover who were both acquired from the Medicine Hat Tigers in a three-way deal on Tuesday.

20-year-old import defenceman Jonas Brondberg is expected to suit up for PG on Friday.

We present to you…