PG Cougars end 2021 by getting their point across 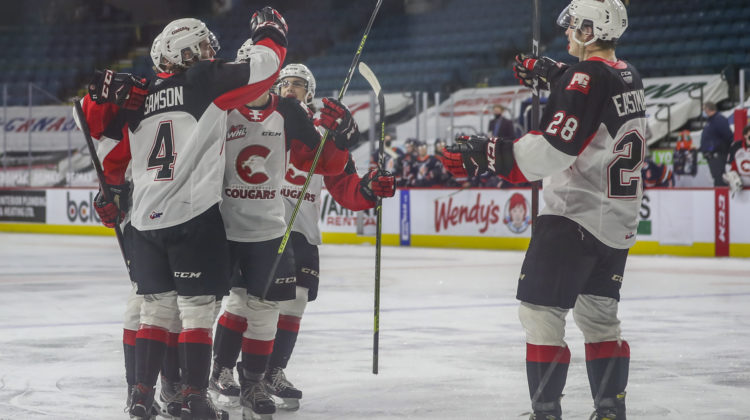 The Prince George Cougars erased a pair of two-goal deficits to earn a point in their final game of 2021.

The Cougars trailed the visiting Kamloops Blazers 2-0 in the first and 3-1 in the second but rallied to tie the game at 3 at the end of regulation.

The Blazers ended a four-game winless skid with a 4-3 victory in a shootout before 2,077 fans at CN Centre after neither team tallied in the overtime.

“That was a heck of a hockey game. The difference tonight (Friday) was our discipline as we took too many penalties but other than that, it was a great effort,” said Cougars head coach and general manager Mark Lamb on the 94.3 the Goat post-game show.

The penalties turned out to be costly for Prince George, as the Blazers scored twice on five power-play chances, while the Cougars, who are winless in their last four, went 0-for-4 with the man advantage.

Carlin Dezainde scored his first goal as a Cougar on a breakaway in the first period to reduce the Kamloops lead to 2-1.

First as a @PGCougars for Carlin Dezainde, and it. is. schweet. pic.twitter.com/DH9NQ6CdXO

After the Blazers went up 3-1 just 1:45 into the second, Koehn Ziemmer replied for the Cats just past the midway point of the game.

Ziemmer set-up the Riley Heidt tying goal with just 3:36 left in the final period of regulation.

Tyler Brennan stopped 32 of 35 shots through regulation and overtime for P.G. while Dylan Garand, who made his first start since coming back from the World Junior Hockey Championship, made 30 saves in the Kamloops net.

We’ve seen some nice saves at the CN Centre this week, here’s another from Tyler Brennan of the @PGCougars!@RealCdnSS | #SaveoftheNight pic.twitter.com/JAeMmwxV2F

Caedan Bankier had three assists for the Blazers, and they got goals from Quinn Schmiemann, Matthew Seminoff, and Daylan Kuefler.

Prince George managed to kill-off a Blazers’ power play in overtime to extend the game to the shootout.

Bankier and Fraser Minten both scored in the shootout for Kamloops.

2022 #NHLDraft prospect Fraser Minten wins it in the shootout for the @blazerhockey! pic.twitter.com/UHNiiBC2Nv

Ziemmer and Heidt were the two Prince George shooters who failed to score.

Danish defenceman Jonas Brøndberg (acquired in the Taylor Gauthier trade with Portland) made his debut on the Cats blueline and had an assist and three shots on net.

Kamloops leads the division by eight points over the (15-9-0-3) Kelowna Rockets.