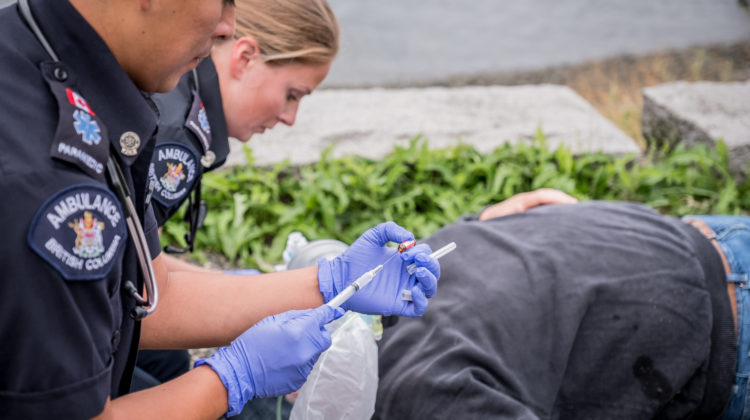 Prince George paramedics continue to be pushed to the limit when it comes to the overdose crisis.

Over the past six years, the number of overdose calls responded to by local paramedics went from 362 in 2016 and skyrocketed to 1,305 in 2021 according to BC Emergency Health Services (BCEHS).

On average, paramedics responded to 97 overdose calls per day, surpassing the 2020 mark of 74.

Brian Twaites, who is a paramedic specialist with BCEHS told MyPGNow.com the public health emergency has taken a hard turn for the worse since the beginning of the pandemic.

“When we look at where the numbers were before the pandemic, we were almost plateauing and now with the pandemic, our numbers are just becoming astronomical, it’s pretty astounding actually.”

While paramedics are the most recognizable first responders when dealing with this crisis, Twaites was quick to credit the call takers who are doing yeoman’s work behind the scenes.

“They really are the front line people because they are the ones taking the first phone call that goes to 9-1-1. They are actively trying to help resuscitate people over the telephone and watching them doing their job is very humbling,” added Twaites.

Every health region in BC saw a spike in these calls last year.

However, Northern Health only showed a 16% increase, the smallest out of all health authorities, and was only about half of the provincial average (31%).

Here is a closer look at the overdose numbers broken down by health region, with percentage increase over the previous year:

According to BCEHS, Prince George, which usually ranks in the top-five communities for overdose calls, dropped off the list and was replaced by Abbotsford.

Here is the full list of the top-five metro communties:

In July, paramedics in the province responded to the highest number of overdoses ever recorded in a single month, which was 3,606.

Twaites mentioned that while there is no “magic bullet” solution in turning the tide against overdose deaths and call volumes, he reminds anyone who continues to use substances to do so in a group setting.

“The most important thing that I can always stress is that if you are going to use recreational drugs is to do it carefully and with somebody else. If you in fact have an overdose, somebody else is there and they are awake and they can make the phone call to 9-1-1.”

“When you are dealing with an overdose, these patients are very close to death – it’s a matter of minutes to even seconds before they lapse into cardiac arrest. The intensity of a call for a paramedic on the street is quite high, you have to ventilate these people right away and get their oxygen levels back up because their brain cells are actively dying.”

According to BCEHS, almost every community had more overdose patients in 2021 than the previous year.

A few communities stand out for being above the provincial average and for showing a significant increase in overdoses – while a few others are noteworthy for bucking the trend provincially and recording fewer overdoses last year:

When asked if storefronts and other workplaces should mandate having naloxone kits on hand as well as educating their employees on how to use them, Twaites believes that step has already been accomplished.

However, he would like to see one slight adjustment made.

“The reality is that I see them everywhere and I think more people have them than we realize. There are a lot of people out there who aren’t even involved in some recreational pharmaceuticals but still have a Narcan kit in their car.”

The BC Coroners Service will unveil its final illicit drug numbers for 2021 in February.

A full list of overdose calls by the community can be found here.