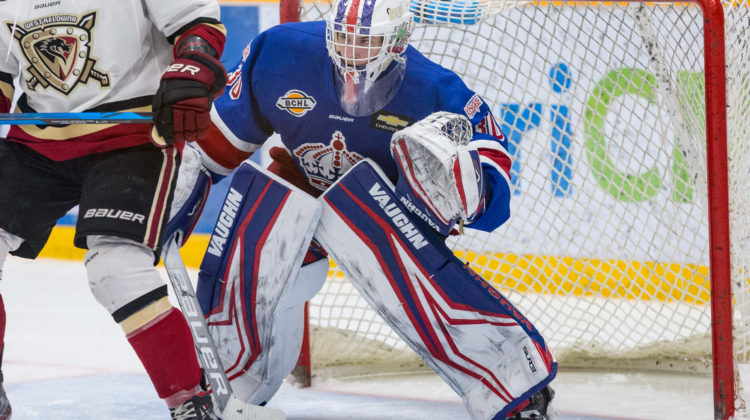 Jordan Fairlie is playing at a level that’s out of this world for the Prince George Spruce Kings.

The 19-year-old from Fort Saint John, turned in another sterling performance as the Spruce Kings earned a gritty 3-1 victory on Wednesday against the West Kelowna Warriors in front of 603 fans at the Rolling Mix Concrete Arena.

“I just come to each and every game with the same mindset that I want to win and do whatever I can to help the team get an opportunity to win. For a goalie, I think the game is more mental than it is physical, showing up everyday with the right frame of mind and I think that has been working for me.”

Fairlie proved to be an early-difference maker for PG in the first period as he was the backbone on three key penalty kills.

Fairlie continued to duel with West Kelowna netminder Johnny Derrick in the middle frame as both teams went end to end with the Warriors holding the edge in shots at 14-11.

To begin the third, PG was awarded a four-minute man-advantage following a high-sticking infraction from Warriors defenceman Pat Lawn.

After failing to score, former Trail Smoke Eater Chase Dafoe tucked home a shot past Fairlie to even the score at 1-1.

“I got a little bit of ice at the end and I have to take that so I moved my feet a little bit, saw an opening and thank god it went because it sure felt good,” said Schives.

Herrington then added his second of the game via an empty net, following a ten-bell save from Fairlie.

In addition, both teams went a combined 0-for-11 on the power-play.

Fairlie is leading the BCHL with a 1.64 goals against average to go along with a .932 save percentage.

“Defensively we have kind of clicked during the last three games as we just have two goals against. We have been doing whatever we can to shut things down and now we have a few more games at home so we can build off the energy at home.”

PG is three points back of the Warriors for third place in the Interior Conference, with two games in hand.

“Our goal is to finish up as high as we can in the standings for playoffs so we can get as many home games as possible. That home advantage is key so we are trying to win as many games as we can to get that going,” added Fairlie.

Newly-acquired players Luke German and Adam Leitch did not dress for PG.

The Spruce Kings continue a three-game home stand on Saturday against the Merritt Centennials.

Puck drop is at 7pm from the Rolling Mix Concrete Arena.