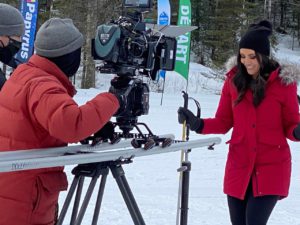 Actress Laura Mitchell, on location at the Otway Nordic Centre in Prince George (Photo provided by City of Prince George)

Another romantic holiday movie is about to begin shooting in Prince George and a call is being put out to cast a few major roles.

The movie called Meeting Mr. Christmas is centered around a popular travel blogger whose negative thoughts about Christmas are put to the test after meeting a doctor who is passionate about the holidays.

Producer, Jana Phillips told Vista Radio anyone interested in trying out will have to get their info in before tomorrow’s (Friday) deadline.

“We have four roles that we will be casting quickly. If somebody hasn’t already sent in their package we would love to hear from them on what they have to do. They have to send in a headshot, and list how tall they are unless it is a child.”

Residents can audition for the following lead roles:

Phillips adds there’s no reason why PG can’t be as popular of a movie location as Kelowna, Kamloops, or Vancouver.

“Really when you look at how much snow we have and such a great community with so much support and volunteers as well as extras, which are more abundant than those big cities so it just makes sense for us to film as many productions here as possible.”

She mentions the roles are expected to be announced in the coming weeks.

Filming is set to take place from February 6–19.