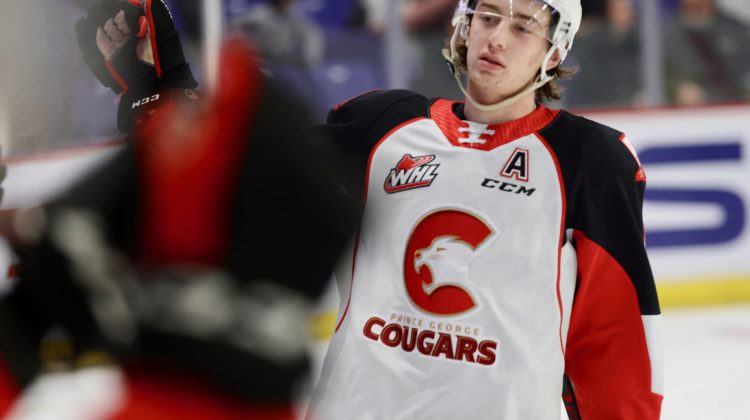 Ethan Samson, who is from Delta, had his own cheering section at the Langley Events Centre and he gave them something to shout about in a Prince George Cougars 3-2 overtime win over the Vancouver Giants.

It was the Cougars first victory in four weeks.

The 18-year-old Samson, a 6th round pick of the Philadelphia Flyers in 2021, scored his second goal of the game and 8th of the season on a rebound at 1:58 of overtime.

Ethan Samson wins it in overtime for the Cougars! pic.twitter.com/2Noc8ySrCw

Samson is the top-scoring defenceman on the Cougars with 24 points in 33 games and he leads the team in shots on goal with 100.

The Cougars erased a 2-0 deficit to end a five-game losing streak Friday night before 2,163 fans in Langley.

Koehn Ziemmer tied the nationally televised game at 2-2 at 14:37 of the second period, exactly two minutes after Samson tallied his first of the night.

Ziemmer, the team’s leading scorer with 11 goals and 25 points, had a chance to give the Cougars the lead but was stopped on a penalty shot by Giants goalie Jesper Vikman midway thru the third.

Tyler Brennan got the victory in net with 37 saves as Vancouver outshot P.G. 39-38.

Brennan now owns .935 save percentage in four games against Vancouver.

The box score is right here.

“That was the most enjoyable win of the season given the circumstances. Playing on national television, coming back from two goals down, and coming out of COVID protocol. To find a way to battle back and win is outstanding for the group,” said Associate Coach Josh Dixon.

Prince George is 7th in the Western Conference, two points behind Vancouver and two points ahead of the (12-15-4) Victoria Royals.

The Royals lost Friday night 6-4 to the Rockets in Kelowna.

Prince George is 4-4 in eight games against Vancouver this season.

Former P.G. Cougars goalie Taylor Gauthier made 48 saves for the Portland Winterhawks in a 4-3 overtime victory over the Seattle Thunderbirds.

One, two, Goats is comin’ for you…

The Thunderbirds outshot the visiting Winterhawks 51-22.

Gauthier is 2-0 with a 0.956 save percentage since joining Portland in a trade late last month.

We had some hat tricks.

We had some comebacks.

HART ATTACK: @Hartley_Miller discusses the day to day world the @PGCougars are living in due to the current Omicron wave.
| https://t.co/AwvpRop5tq #CityofPG #sports #northernbc #PrinceGeorge pic.twitter.com/bQQUIqSg6w