The Houston RCMP is investigating an incident where they claim individuals engaged in a violent confrontation with employees of Coastal GasLink (CGL) and police officers.

Early this morning (Thursday, February 17th), police were called to the Marten Forest Service Road after CGL security reported acts of violence at their worksite. 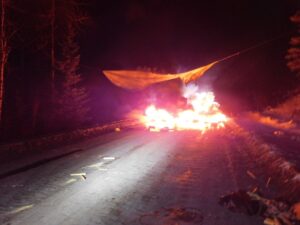 According to police, around 20 people, some of whom were armed with axes, were attacking security guards and smashing their vehicle windows. It was initially reported that some CGL employees were trapped, but had managed to safely leave the area.

When police arrived at the 41 km mark, the roadway had been blocked with downed trees, tar-covered stumps, boards with spikes in them, and fires that had been lit through the debris.

According to mounties, several people threw smoke bombs and fire-lit sticks at police as they worked their way through the debris. One officer was reportedly injured. 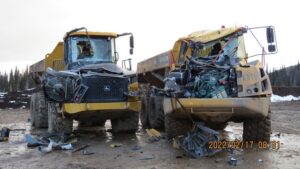 Police say an old school bus blocked the road at the 43 km mark, but no one was located in the area. The bus was cleared from the road with the help of CGL.

Police say when they arrived at the drill pad, they had found significant damage had been done to heavy machinery, fencing, and portable buildings. They also did not encounter any further blockades as they made their way to the pad, and no one was located at the site.

This is a very troubling escalation in violent criminal activity that could have resulted in serious injury or death. This was a calculated and organized violent attack that left its victims shaken and a multimillion-dollar path of destruction, said Chief Superintendent Warren Brown, North District Commander.

The RCMP is appealing to the public for assistance about the incident.

Anyone with information about the individuals involved is asked to contact the Houston RCMP. 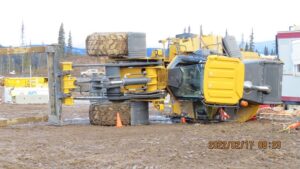 BC’s Minister of Public Safety and Solicitor General, Mike Farnworth has issued the following statement about the incident:

“The BC Government emphatically condemns the violence and destruction perpetrated near the Morice River drill pad site off the Marten Service Road. The RCMP is conducting a full investigation into this egregious criminal activity that could have led to serious injury or loss of life. The police report indicates that the workers’ camp was attacked in the middle of the night by unknown assailants wielding axes. There is no excuse for such violence and intimidation. All workers deserve to be protected from harassment and harm. This Destructive attack should be condemned by all in British Columbia.”