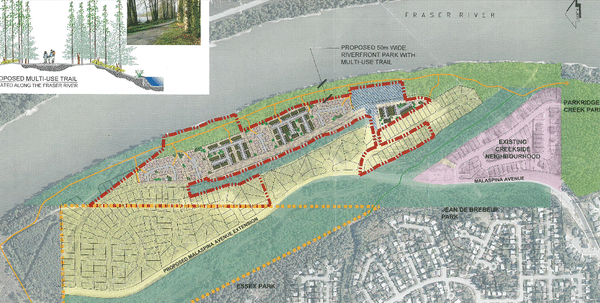 A new housing project planned for College Heights is not sitting well with local residents.

On Monday night city council held a public hearing regarding the development of green space along the Fraser River to be turned into single and multi-family housing units.

The project was approved despite complaints from locals that the existing space is frequently used by the community.

“That area gets used by a ton of people. Whether you’re snowshoeing or hiking or walking your dogs…” Said Brad Johnson who spoke to council in opposition of the project. “It’s a real shame to see this now all ripped up just to put these multi-residential buildings in place.”

Another local opposed to the development is Sherrie MacIvor who complained residents weren’t given enough notice about the proposed development.

“They put one sign up and not everyone sees that sign when it’s thirty feet back from the sidewalk” said MacIvor. “Maybe a letter to each resident in the area that would say hey this is happening in your area right now, you can either do something about it or not”

MacIvor also mentioned she had started a petition against the development but didn’t have enough time to collect many names.