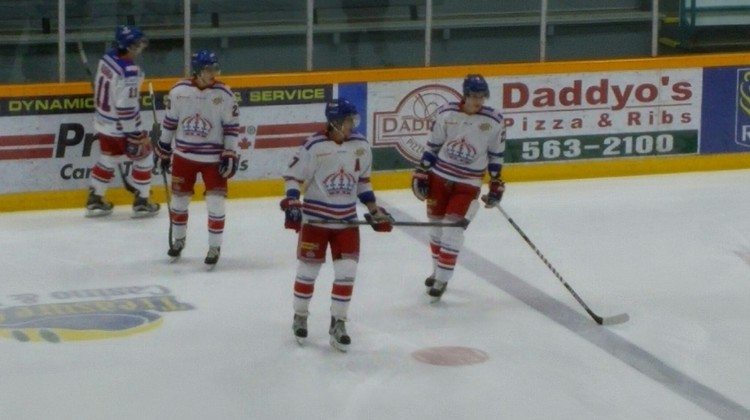 It was the Jordan Kawaguchi show with four goals at the Prince George Coliseum as the Chilliwack Chiefs dumped the Spruce Kings 7-3 tonight (Thu).

Prince George drew first blood 38 seconds in when Nick Guerra took advantage of a Chiefs turnover to make it 1-0.

Chilliwack would rebound later in the period when Kawaguchi netted a pair of goals at 13:11 and 16:26 for a 2-1 score.

Before the end of the period, Chase Dubois tied things up after a nice feed from Jordan Funk putting it past Chilliwack goalie Aidan Pelion making 2-2 after 20 minutes.

Corey Hoffman would put Prince George in front 28 seconds into the middle frame for a 3-2 advantage.

Matteo Esposito would relieve Aidan Pelino after that goal for 10 seconds before Pelino re-entered the game.

The floodgates would open for the Chiefs as Kawaguchi potted two more, 8 seconds apart, while Austin Adam ripped a slapper past Spruce Kings goalie Sam Tanguay giving the visitors a 5-3 lead after 40 minutes.

Chilliwack added to the lead courtesy of Kohen Olischefski and Eric Benshadle to ice the victory.

The Spruce Kings remain 11 points back of Coquitlam for the final playoff spot in the Mainland Division with the Express playing the last place Surrey Eagles Friday.

The Chiefs will play the Spruce Kings again tomorrow (Fri) from the Coliseum at 7pm.